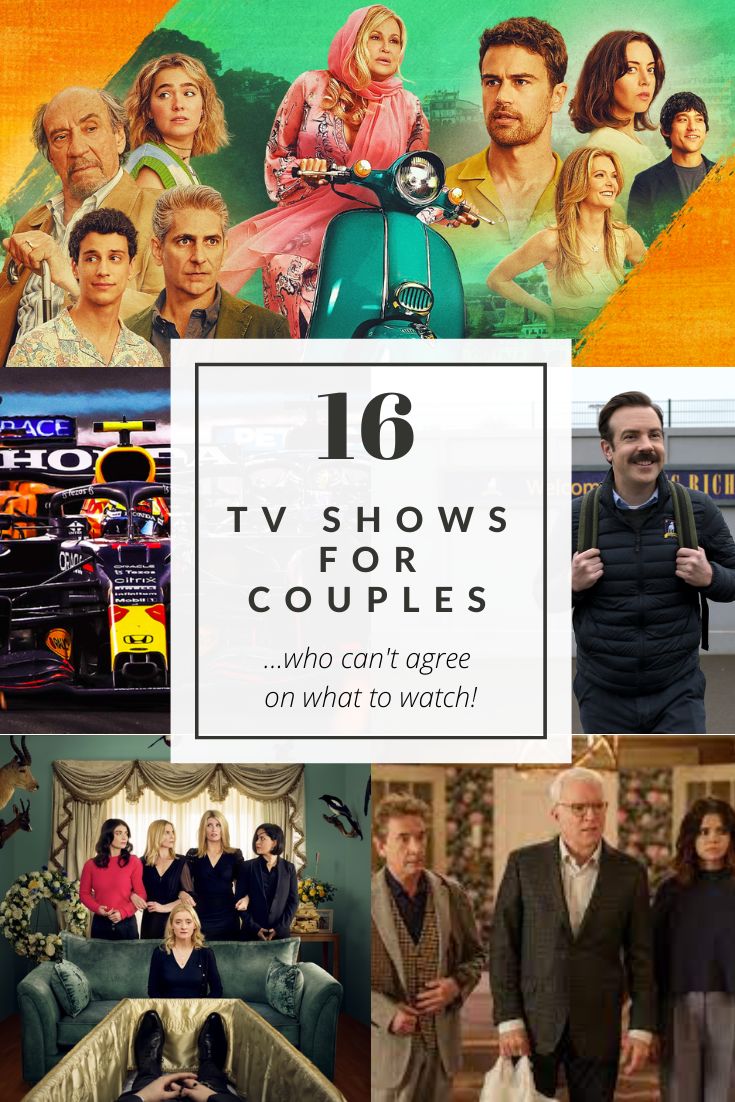 You love your significant other… of course you do! But that doesn’t necessarily mean you have the same taste when you turn the tv on. They might be able to watch hours of football or Star Wars on repeat, while your comforting TV show is Emily In Paris. Ummm… there’s a definite disconnect there!

Luckily, Adam and I have discovered a bunch of really awesome and amazing TV shows for couples to watch together. Obviously, everyone’s tastes are different, but these are the ones we’ve both agreed on!

Bad Sisters was one of our favorite shows of 2022. It’s about a group of close sisters in Ireland. One of their husbands suddenly dies, and his life insurers launch an investigation to prove malicious intent… which may or may not include the sisters. It made us mad but also made us laugh – and while it was supposed to be a limited series, I heard it got renewed for Season 2!

There’s no way you haven’t heard of The White Lotus, but if you haven’t watched it yet, then this is your sign to start! To be honest, I didn’t love Season 1 – I was interested in it and watched all of the episodes, but I hated all of the characters. Season 2 was a totally different story though! It SUCKED ME IN. First of all, it takes place in Sicily, so that automatically made me obsessed.

But beyond that, I thought the mystery element was really good this time, the characters were all super complex (went from empathizing with them to disliking them to being frustrated with them and everything in between), and I ultimately couldn’t stop thinking about it from week to week.

3. Only Murders In The Building (Hulu)

To be honest, I don’t think I know anyone who hasn’t enjoyed this quirky show, one of the best tv shoes for couples. It’s about 3 strangers (Martin Short, Steve Martin, and Selena Gomez!) who all live in the same building on the Upper West Side when one of their neighbors gets murdered. Bonding over their love for true crime podcasts, they decide to start their own to try to crack the case.

This show is a little crude but it had us CRYING laughing at pretty much every episode. It’s about the two siblings of a 13 year old Justin Bieber-type who suddenly rises to fame. While their younger brother becomes a pop sensation, Brooke (a former professional dancer) and Cary (an aspiring actor) have to figure out how to find their place in the world now that they have a famous family member. It is hysterical.

We have watched Happy Endings from the beginning a few times and it cracks me up every time. The plot revolves around 6 best friends in Chicago – need I say more? Even though it’s not actually shot in Chicago, the characters are incredibly lovable and we regularly laugh out loud at the ridiculous things they say. Definitely a feel good show!

Oh, Ted Lasso, is another one of the tv shows for couples. What a gem of a show! It’s about an American football coach who gets hired to be a soccer coach in England. Why? Because the owner is getting a divorce and wants to run the team her ex loves so much into the ground as revenge. Jason Sudeikis could not be more lovable as Ted, and the rest of the cast is just as delightful. It’s well written, well acted, well produced… it’s just great. Watch it!

Top Chef isn’t currently on tv (Season 20 coming this spring!), but if you’ve never seen it, there are 19 seasons on Hulu to binge your way through! I personally think it’s the best competition show on tv – it’s entertaining, well made, and addicting. Plus it’s fun to root for chefs from your city, and then eat at their restaurants. Go Chicago!

Speaking of chefs, The Bear is a show about a young fine dining chef who returns to Chicago to run his family’s sandwich shop after his brother’s death. Jeremy Allen White (from Shameless!)  is excellent as Carmy, and you will be saying “yes chef” every time you’re in the kitchen by the time you’re done with Season 1!

I don’t think we ever would have watched Formula 1 if my friend Kaitlin hadn’t suggested it to us, but we LOVED IT. There are 4 seasons that follow Formula 1 drivers, managers, and team owners, and give an inside look at the fast paced competitions.

And if you’re not a big sports fan, please do not write this off! The sport is actually super interesting, plus there’s TONS of drama that sucks you in, and the drivers are… umm… extremely good looking 😉

Succession is about the Roy family, aka the owners of Waystar Royco, an international media conglomerate. As the aging patriarch, Logan, begins to consider what the future holds after he steps down, each one of his children see a reason why they should be the one to take over.

Pretty much everyone on this show is a terrible person, but the family dynamics, backstabbing, and other twists make it impossible to look away.

House of the Dragon is the prequel to the beloved show, Game of Thrones. It follows the reign of House Targaryen about 200 years before the GOT series begins. I wasn’t so sure about it at first because they cover a LOT of ground in the first season, switching up the cast as they get older, and skipping many years in between episodes. But by the end, I was hooked and I can’t wait for Season 2!

Adam has never had any interest in this show because he’s not a fan of Zooey Deschanel – but I had an urge to rewatch this show recently. After loudly laughing at some of the first episodes, I convinced Adam to watch it for me for Schmidt and Nick – and he really enjoyed it! It’s a good palette cleanser show. Low stakes and silly!

Let’s say you love the royals and your significant other loves history. If that’s the case, have you watched The Crown?! Not only are the historical elements fascinating, but the casts and cinematography are top notch.

I watched all of Schitt’s Creek on my own because Adam wasn’t interested… but after finishing the whole series, I convinced him to watch it from the beginning with me. It’s about a very wealthy family who lose everything, except for this small town called Schitt’s Creek that the father bought for his son as a joke. Their only option is to move to a motel in this town and the arcs that these characters go through are just so good. You will love them so much by the end!

I wasn’t sure I’d like this show at first, but it is actually really sweet and funny. It’s about an insecure teenager who offers “love” advice to another student based on what he has learned from his therapist mother. As classmates start to find out, he teams up with a smart rebel classmate, Maeve, to create a secret sex therapy clinic. Chaos ensues!

We just started Abbott Elementary and it gives me Parks & Rec vibes! It’s about a Philadelphia public school and the teachers that work there. They are outnumbered and underfunded, but they are passionate and dedicated to educate the children. It’s really cute!

Do you have any other favorite tv shows for couples?