This is a game changer.
Baked Pumpkin Donuts. 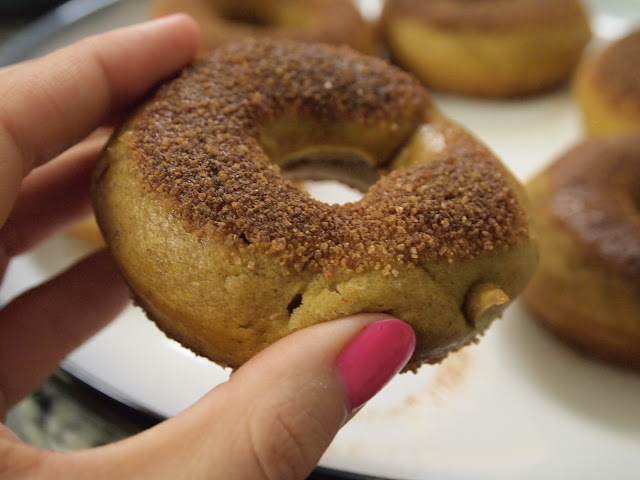 These are just as good as you imagine.  And because they are baked, it is just as easy as making muffins or cupcakes… but way more fun because it’s a DONUT!
I can’t wait for you all to make these and fall in love.  A perfect treat for Thanksgiving morning!
First you will need to buy a donut pan.  We used this one.
Here’s how you make them!
New feature: Print recipe here!
Ingredients
(for the donuts)
1 3/4 cups flour
1 1/2 teaspoons baking powder
1/2 teaspoon salt
1 1/2 teaspoon cinnamon
1/2 teaspoon nutmeg
3/4 teaspoon allspice
1/4 teaspoon ground cloves
1/3 cup olive oil
1/2 cup brown sugar
1 egg
1 1/2 teaspoon vanilla extract
3/4 cup canned pumpkin
1/2 cup almond milk
(for the coating)
1/2 cup earth balance
1/3 cup sugar
1 tablespoon cinnamon 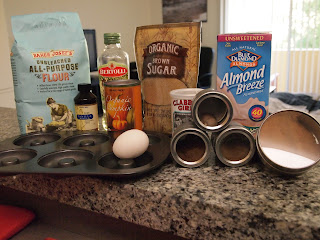 Preheat the oven to 350 degrees.  Butter (Earth Balance) the donut pan.
In a mixing bowl, combine the baking powder, salt, spices, and flour together. 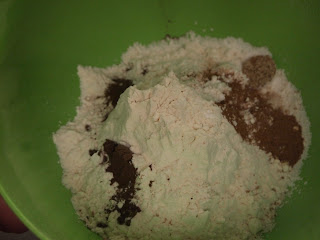 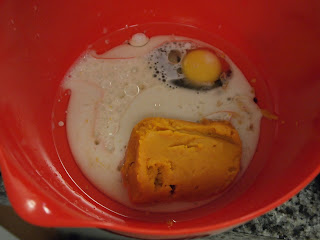 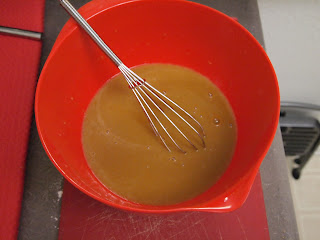 Once that is combined, add the dry mixture to the wet mixture- a little at a time! 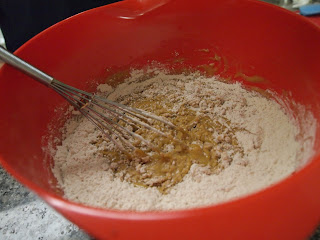 Once all of that is combined, it’s time for the real fun. 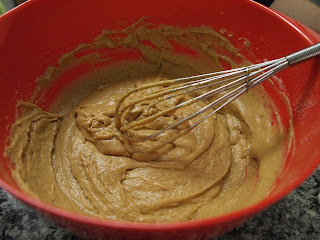 Either spoon or pipe the batter into the donut pan.  We decided to pipe it by spooning the mixture into a plastic bag and cutting the tip off.  Then squeeze the batter out, like so: 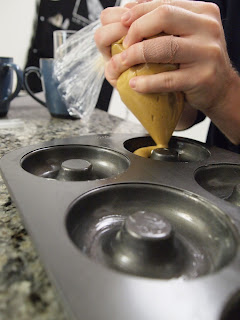 And then you have this! And you are ready for the oven!! 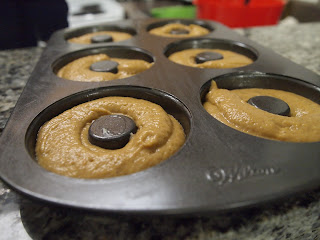 Bake for about 13 minutes. The donuts should be springy to the touch.
Turn the donut pan over and let the donuts fall out (seriously, they come out so easily, it’s awesome).
Let them cool.  After about 2 minutes though, make sure you flip them.  You don’t want them to get soggy. 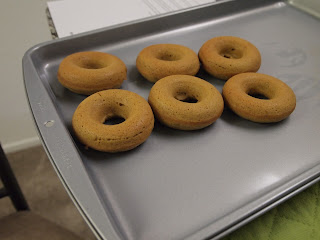 This is what we are working with.  You good so far? 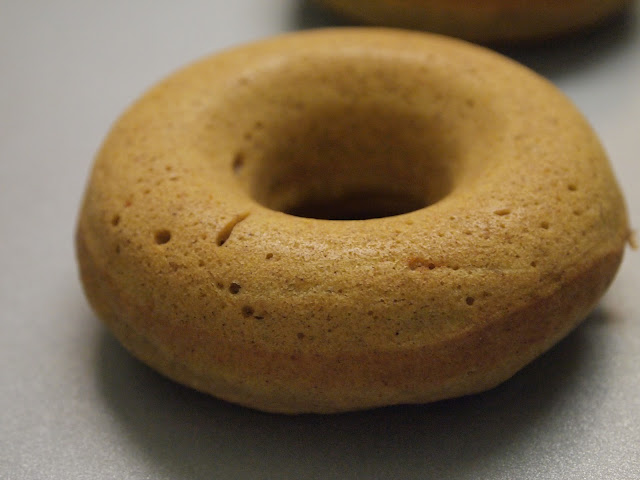 Now it’s time for the topping. Melt the earth balance or butter.
Dip the donut right on in. 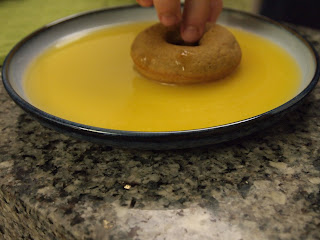 Combine the sugar and cinnamon.
Now dunk the buttered donut in that mixture. 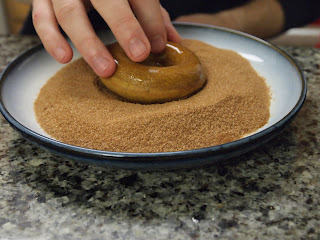 I think if we made it next time, we would have sprinkled the cinnamon mixture on top instead of pressed it on.  Don’t get me wrong, it was still delicious!  But, if you dont like a ton of sugar or cinnamon, try lightly sprinkling it on instead of dipping the donut right in. 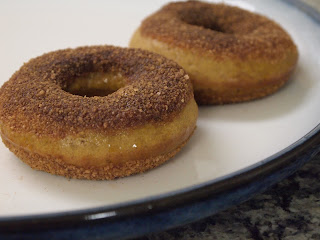 Another tip- this recipe makes enough batter for 12 donuts.  If you aren’t going to eat all of them the day you make them, don’t coat them yet.  Save them in a bag or tupperware until serving.  Then, coat them.  This will prevent them from getting soggy. 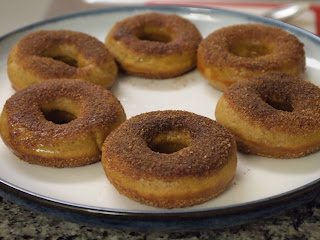 Okay, enough about saving them for later.
Serve with coffee and ENJOY! 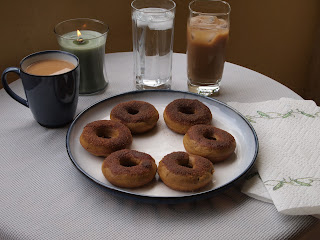 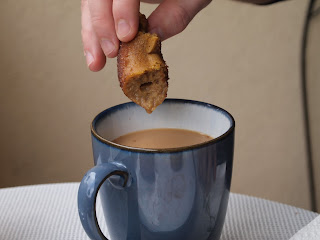 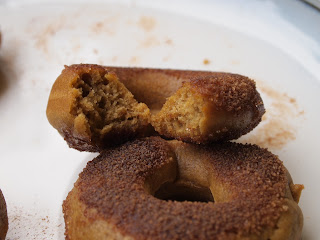 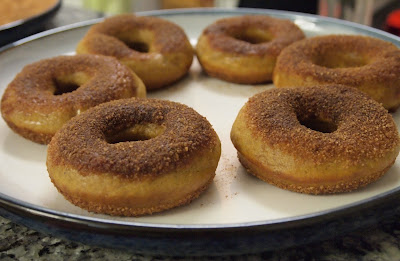 **Adapted from this recipe. 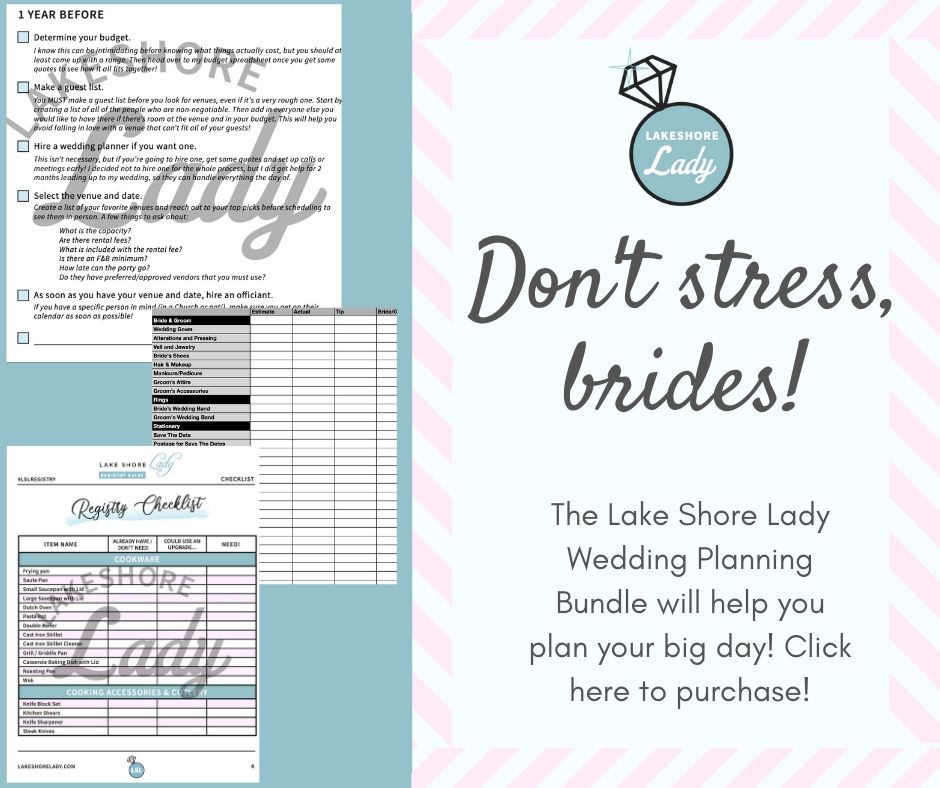 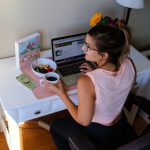