Everyone loves a good TV marathon, so here is a list of my favorite binge worthy shows! 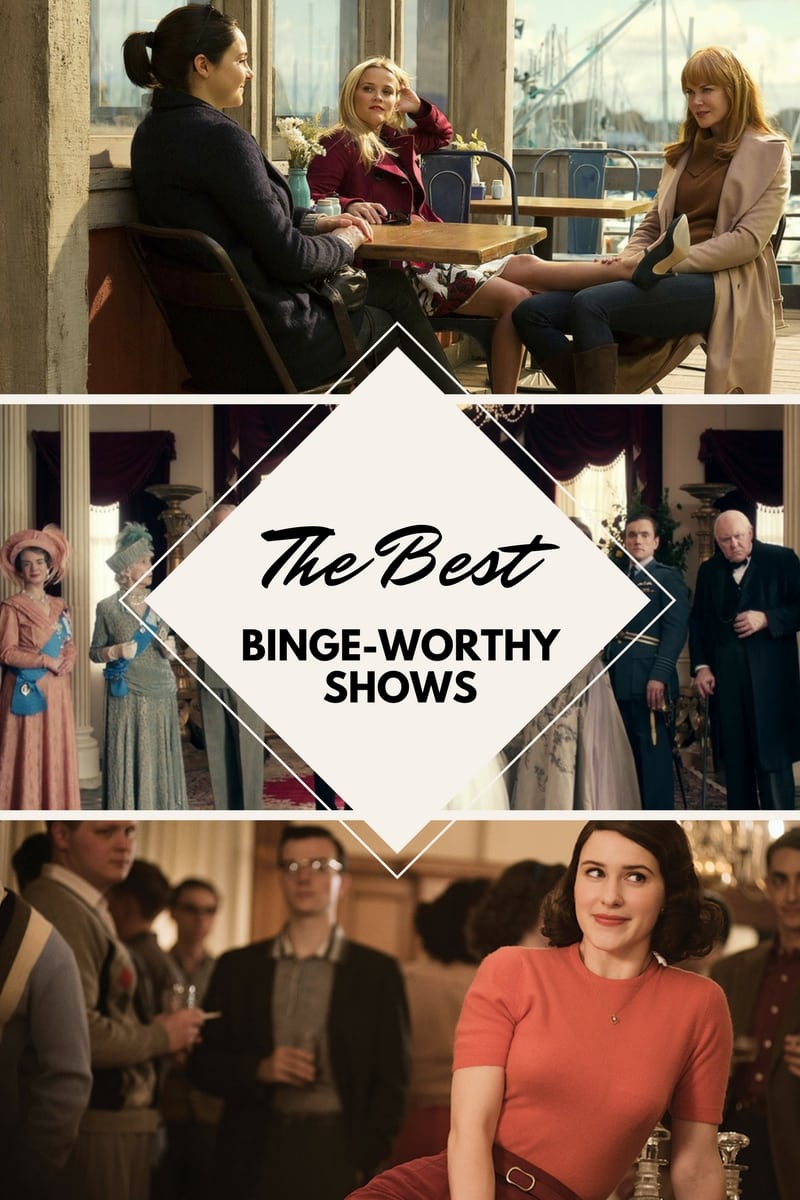 As I was brainstorming posts for this week, I realized that a lot of you are going to be spending more time at home than usual. At least, I hope you are! With the dangerous temperatures today, I’ve seen a ton of business closures and modified hours, and I know a lot of my friends have been told to work from home. I’d hope most businesses would deem -20 degrees too cold for commuting, right?!

Now I know most of you still have to work even if you get to stay in PJs… but for those of you who don’t, or those of you who have mindless tasks to work through tomorrow, I thought I’d update this list of the best binge worthy shows for ya!

Whether you can turn something on this morning with a cup of coffee, or you have to wait until it’s time for wine and popcorn tonight, I hope you find something entertaining to snuggle up with. Stay warm, friends!

I thought I loved Season 1, but I think I loved Season 2 even more! For those of you who haven’t watched any of it, it’s about an adorable Jewish wife/mother from the 1950’s who finds out her husband is cheating on her. But instead of a sob story, this helps her discover that she’s capable of way more than she ever realized… and she’s funny as hell ? Rachel Brosnahan and Tony Shaloub are absolute perfection, plus it’s fun to see New York (and the fashion!) from that time period. Can’t recommend enough. Watch on Amazon Prime.

For some reason, I never got on board with this show when it first came out… but my friend Danielle kept telling me to give it a shot and now I’m obsessed. Basically, Jane Fonda and Lily Tomlin find out that their husbands (business partners played by Martin Sheen and Sam Waterston) want a divorce because they are actually in love with each other. To cope, the two women move into the beach house the two families shared, despite their completely different personalities. It’s quirky and silly and heart warming… aka perfect for a cold winter day at home! Watch on Netflix.

I started watching this on a whim because I love Eugene Levy and Catherine O’Hara… but I kept watching because their “kids” on the show are so ridiculous. The characters are definitely mocking vapid rich reality starts, but the show gets surprisingly touching as the seasons go on. Watch on Netflix.

Okay, I know this is a nerdy suggestion, but TRUST ME. If you love British accents and catchphrases, cooking shows, and baked goods – you’ll like it, too. All of the seasons are really fun, but Season 3 and Season 6 are my favorites! Watch on Netflix.

Sutton Foster stars in this silly comedy about a newly single 4o year old woman who lies about her age to get a job after leaving her career to be a Mom for the past 18 years. Instead of a housewife in New Jersey, she is all of a sudden living a 26 year old’s life in Brooklyn. There’s tons of drama, funny situations, hot boyfriends, and lots of time with her new work bestie – played by Hilary Duff! Watch on Hulu.

Nothing new here, just my favorite show ever. If you haven’t seen it yet, Treat Yo Self and start it NOW. Watch on Netflix.

This is another one of my all time favorites, except it’s very likely that you ALL have watched it by now… right?! Watch on Netflix.

Ellie Kemper (The Office) plays a woman who was abducted and held captive by a crazy doomsday cult leader in Indiana for 15 years. But wait – it’s a comedy! After she’s rescued, she goes to New York City to film a segment on The Today Show (obvi) and decides to stay and start a new life in the big city. She quickly moves into an apartment with a flamboyant struggling actor named Titus Andromedon and becomes a nanny for an Upper East Side family. As someone who was in musical theatre in New York AND babysat on the side, this show literally makes me laugh out loud. Watch on Netflix.

Tina Fey, Jane Krakowski and Alec Baldwin in all their glory. Enough said! Watch on Netflix.

If you love Mindy Kaling from The Office, you MUST watch Season 1 of this show. Mindy plays a doctor in New York who is obsessed with romantic comedies… which makes her dating tactics extremely entertaining. Just wait until Anders Holm plays her “cool Christian boyfriend” – it’s the best. Watch on Hulu.

I was too young to watch this show when it originally aired and I never really had an urge to watch it on my own after it was on TV. But a few weeks ago, I saw an interview with the cast for the 20th Anniversary and told Adam I feel like I missed out on this groundbreaking show. His response? Let’s start watching it NOW! Turns out Season 1 is a lot funnier than I expected, especially considering a few of the accents sound like my family out on Long Island. It’s wondahful ? Watch on HBO.

I tried to watch Shameless a few years ago and couldn’t get into it, but Adam and I decided to give it another shot and I am FULLY INVESTED now. I was so frustrated with the characters in the first season, but now that I care about so many of them, I’m dying to know what’s going to happen next. Plus, I love that it takes place in Chicago! Watch on Netflix.

Honestly, I wasn’t sure which category I should put this in! It is a telenovela at the heart of it, but it also pokes fun at the genre itself. It’s about a virgin who gets accidentally artificially inseminated… and keeps the baby. Everything about this show is over the top, but in such an endearing way. Plus, there’s a HUGE plot twist at the end of the last season! Watch on Netflix.

THIS IS A MUST WATCH. If your excuse is that you don’t have HBO, find an HBOGo password and get on it.  The combination of the story and all star ensemble cast are not to be missed, especially when that cast includes Nicole Kidman giving the best performance of her career (in my opinion!). Plus, you’re also going to want to be caught up before Season 2 premieres with Meryl freaking Streep. Oh yeah. Watch on HBO.

Even if you aren’t obsessed with all things royal, I highly recommend this show. The acting, the cinematography, the sets, the costumes – it’s all top notch. Plus, because it’s history, this is far from a “chick show.” It’s about history! All of it actually happened! I know so many men who have been sucked in just as much as I have, so if you have a reluctant boyfriend/husband – tell him he has no excuse! Watch on Netflix.

I am a self proclaimed scaredy-cat. I have trouble watching murder shows, I get freaked out after Law & Order: SVU and I literally can NOT watch horror movies. If you can relate, I’m here to tell you that you can handle Stranger Things. I recommend watching it with a buddy if you can, but even still – you should watch it. It’s incredibly entertaining, the acting is amazing, and you will fall in love with all of the kids on the show. (And no, the upside down is not coming to get you!) Watch on Netflix.

Last year, Adam and I spent the better part of winter watching every single episode of Game of Thrones. Yup, from the beginning. Even though it’s on this list of binge worthy shows, it’s definitely a commitment. That being said, it’s SO fun to finally understand what all the buzz is about. Who’s excited for the final season?! Watch on HBO.

I stand by the fact that this is one of the best start-to-finish tv shows of all time. Plus, Elizabeth Moss being a trailblazer and Jon Hamm in a suit? Sign me UP. Watch on Netflix.

I loved this show when it was on TV, but about 6 months ago, I watched Season 1 again… and it’s just a good as the first time. Plus, I couldn’t get over how many Game of Thrones actors are in it! If you love British dramas, but you haven’t swooned over Matthew Crawley yet, you’re in for a treat! Watch on Amazon Prime.

If you love This is Us, but you’ve never seen Parenthood, you need to spend some time with the Braverman family ASAP. This was the original “weekly cry” show – and they will forever be my favorite TV family. Watch on Netflix.

I don’t know about you, but I knew about the OJ trial without really understanding it. This show broke it down SO well, which shouldn’t be surprising considering they got amazing actors like Sterling K. Brown and Sarah Paulson to bring the story to life. So well done. Watch on Netflix.

I haven’t watched this yet, but everyone says that it was one of the best shows from 2018! Definitely next on our list. Watch on Hulu.

Did I leave any binge worthy shows off this list?

Also, if you haven’t watched the Fyre Festival documentaries on Netflix and Hulu, I highly recommend those! That whole story is absolutely wild. Have you seen them yet?

PS. You might also like How To Help Those Less Fortunate During The Polar Vortex, The Best of Chicago Restaurant Week 2019, and Pasta Fagioli Soup Recipe.