The Best Board Games For Two People 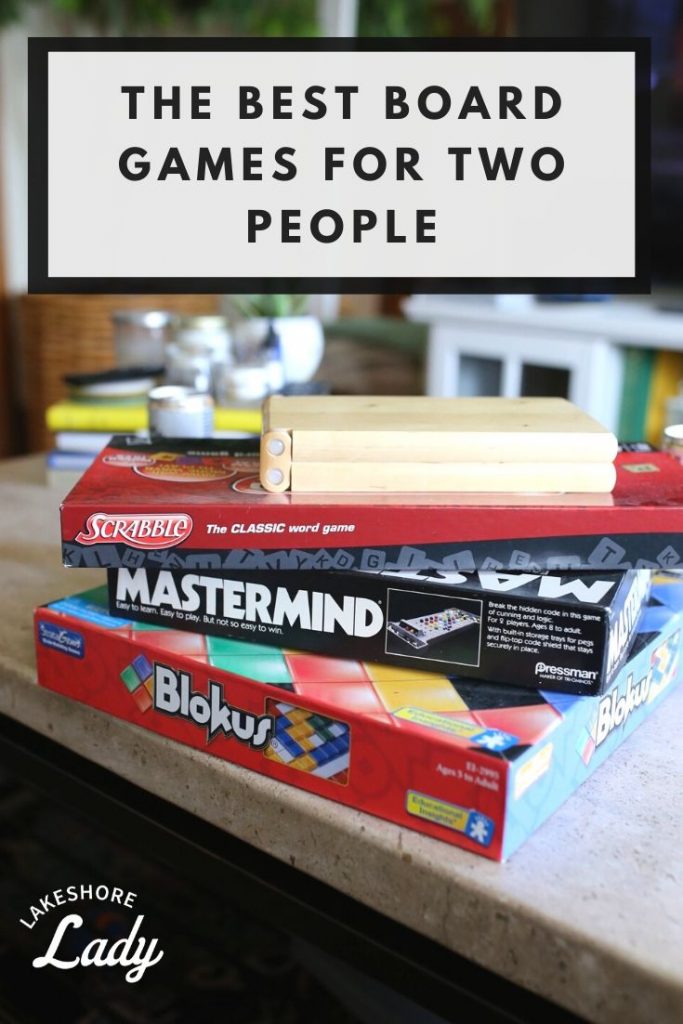 Well, this post took WAY longer than I thought it would, but I’m SO excited to share it with you! Those of us who are living with a significant other or roommate are probably feeling the monotony of quarantine evenings. Binge watching lots of TV shows is fun, but if you’ve been craving an activity, here are the best board games for two people – according to us and YOU!

I’m still blown away by the amount of suggestions you all submitted – there are SO many games I never knew existed and so many classics I had totally forgotten about! I also didn’t realize that you can alter some of these party games to make it work for just 2 people. So smart!

How To Set Up A Game Night For Two

If you want to make game night a little bit more special than any other night, it’s all about the snacks, treats, and cocktails! Last game night, I made my easy blueberry crisp served with a little ice cream, and Adam was so happy. Pop open a bottle of wine or shake up some martinis, too!

And don’t forget some background noise. If you’re in the mood for music, find a fun Spotify playlist – or just put on one of your favorite TV shows that doesn’t require your full attention. I know I’m earning points with Adam if I’ve set up a game night with Star Wars on in the background 😉 Fiance of the YEAR. 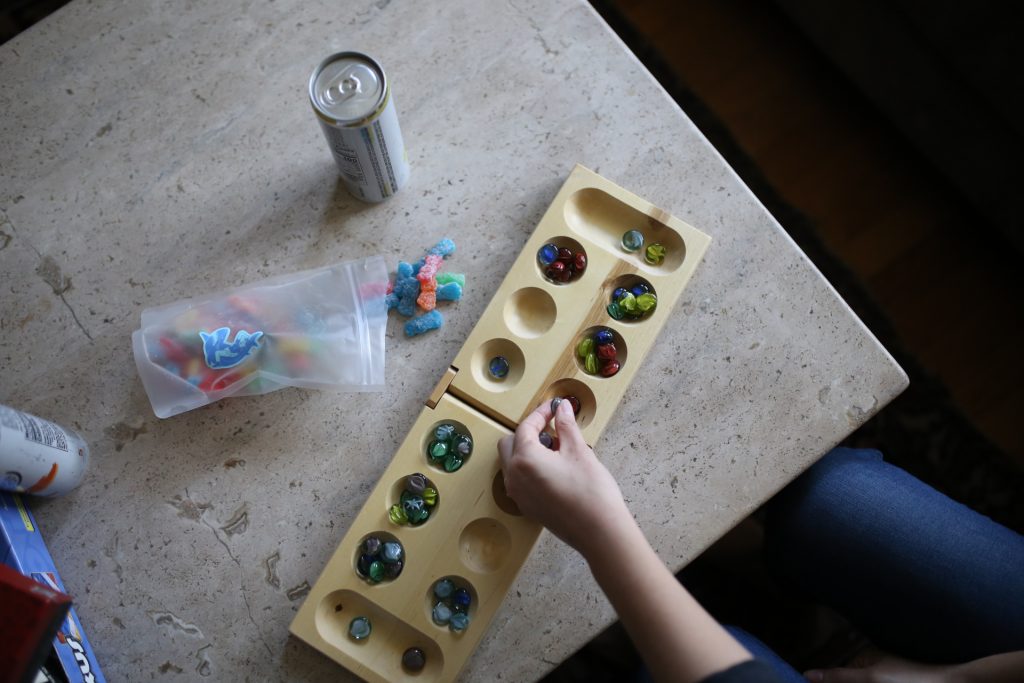 Best Board Games For Two People

Mancala has been my personal favorite – mostly because I can usually win the game against Adam ? I looooved this game as a kid, so as soon as we pulled it out again, it all came back to me. Each board has two rows, with 6 circular spaces for each player. On the ends, each player also gets an oval space, which is their “home.” Each circular space has 6 beads in it at the start of the game and the goal is the get the most number of beads in your “home” space. There are a few additional rules, but overall it’s very simple and so much fun to play!

You can’t have a game roundup with Scrabble – it’s ones of the best 2 player board games ever! I feel like it’s almost more fun with only 2 people, because I’m less embarrassed if I can only come up with 3 letter words to play for a few turns… but it’s still fun when you get a really good one!

This one was pretty new to me, but Adam used to play it as a kid all the time. It’s really just a simple strategy game – the “Codemaker” sets a secret code, and the “Codebreaker” tried to match the code. After each move, the Codemaker gives clues to the Codebreaker. It requires logic, deduction, and luck. It’s really fun!

Blokus is another strategy game. Each player gets a set of 21 pieces and takes turns placing them on the board. Each piece you play must touch at least one other piece of the same color – but only at the corners. The goal is to get the most pieces on the board first. It’s a great game to play while listening to music or even watching a movie since it isn’t a super competitive game. (Unless you take all games seriously!)

Phase 10 isn’t a board game – but I still count it (there are a few other card games in this list, too)! The game requires 10 rounds, and for each of those rounds, players have a different and specific “phase” to complete. Those who complete the phase move on to the next one, but those that don’t have to try again and can’t advance until they complete it. It’s easier to understand when you see the actual phases… and I’ll admit that it’s more fun with a group. But it still works with two people!

If you haven’t played Checkers in a while, you definitely should. It’s a classic for a reason!

This is our go-to card game for a night with our friends, but you can also play it with 2 people. I think it’s more fun with more people, but not matter how many players there are, the goal is to avoid the Exploding Kitten card! It’s super fun and really easy to learn, too.

I think every 90’s kid loved playing Battleship, right?! If you need a refresher, game players work to sink their opponent’s ships without seeing where they are.

This game couldn’t be simpler – you just have to get 4 in a row and you win!

I have a confession to make: I don’t know how to play chess. I’m pretty sure I knew the rules at some point in my life, but if Adam asked me to play with him today, I wouldn’t know where to start ?

A backgammon board has 24 triangles and two “home” zones. The goal is to move all of your checkers into your home zone and remove them from the board. The first player to do that wins!

We still haven’t played this game yet, but our good friends LOVE it. Basically, you roll six dice of different colors and cross numbers off of your scorecard as you try to score the highest points. There are some more rules, but that’s the main gist of it!

Don’t want to commit to a full game of Monopoly with just 2 people? Me neither! Luckily there’s Monopoly Deal which is a card game version without a game board that takes way less time to play. You can play action cards to charge players rent, steal their cards, or even demand money. The goal is to be the first to collect 3 full property sets of different colors.

The object of Quiddler is to get points by combining lettered cards to make words. All words must be at least two letters long – and they must be in the dictionary! Each card has a point value and the player with the most points wins.

So… I had never heard of this, but so many of you suggested it and it looks RIGHT up our alley! It should arrive on our doorstep within the next few days 😉 It’s a simple pick-and-pass card game, and the goal is to be a “sushi master” and select the perfect combination of sushi and sashimi. So cute!

I have distinct memories of playing this game at my Nana and Papa’s house when I was little. The rules are a little bit harder to explain than I remember, so instead, I’m just going to point you to the instructions.

This is another one I remember playing with my Nana and Papa – but I can still explain these rules! Each player takes turns placing numbered tiles in runs or groups, and the first player to use all of their tiles wins!

Did you guys know there’s a board game about the Chicago transit system?! You have to strategize your optimal route by utilizing trains and buses, but watch out for detours! I’m so glad someone suggested this, because it looks like the perfect game for Chicago natives!

I’m just going to be honest – I have ZERO interest in playing a game called Pandemic when an actual pandemic is happening ? And yet, a TON of you recommended it! Players take on the role of a skilled member of a disease fighting team, working hard to save humanity in this cooperative game. I feel like I’d love it if it didn’t hit so close to home right now!

Every card you play forms your expedition route as you earn points and search for lost cities in the Himalayan mountains, the Egyptian desert, the Central American rainforest, and more.

If you like Scrabble, you’ll love Bananagrams! It’s a very similar word game, except speed is more important than points.

In this game, you use your cards to create the best battle formations to defend your village. When you claim enough stones, you win the game!

Did you know there’s a 2 person card game version of Settler’s of Catan? I definitely didn’t!

This cooperative board game is all about working together to capture four sacred treasures from the ruins before the island sinks! Fun fact: this was created by the same man who made Pandemic!

PS. You might also like The Best TV Shows For Couples Who Can’t Agree On What To Watch and Free At Home Workouts During Quarantine.