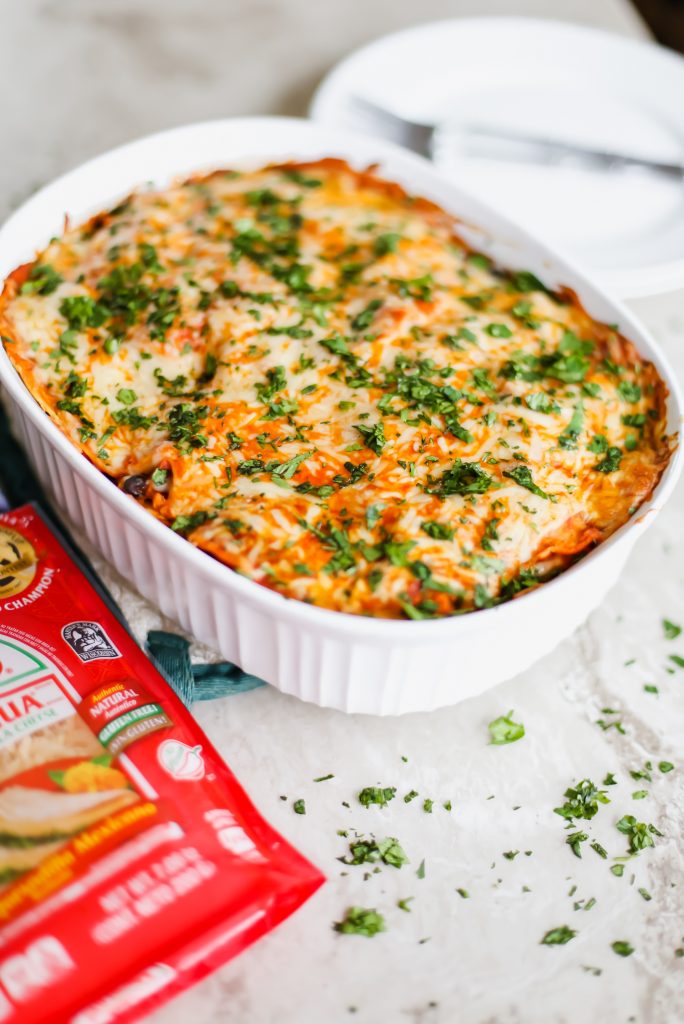 There’s something about winter that makes me want to make big batches of food. Are any of you like this?! Maybe it’s because spending an afternoon in the kitchen next to a warm oven feels really nice when it’s snowing out? Or maybe it’s because the holidays are so crazy that when I’m in the mood to cook, I want to take advantage of it – so when I’m not in the mood/too busy to cook, I don’t have to! ? Regardless, this easy chicken enchilada casserole recipe is a favorite this time of year.

I specifically like this recipe because, while I love enchiladas, rolling each one can get very tedious. This recipe takes all of that work out of the equation. All you need to do is layer this hearty filling, corn tortillas, and of course CHEESE!

My favorite cheese for recipes like this is V&V Supremo Shredded Chihuahua® Cheese. Not only does it melt better than anything else, but it is also made from pasteurized, grade “A” whole milk cows from Midwestern farms with no added artificial hormones. In fact, V&V Supremo® is based right here in Chicago! The founders created this company in 1964 because they saw a lack of fresh cheese that “evoked the countryside of Central Mexico” in our grocery stores here. Since then, it has grown into a full product line of dairy and meat products. They’ve even won awards by the American Cheese Society! Told you it was the best ? 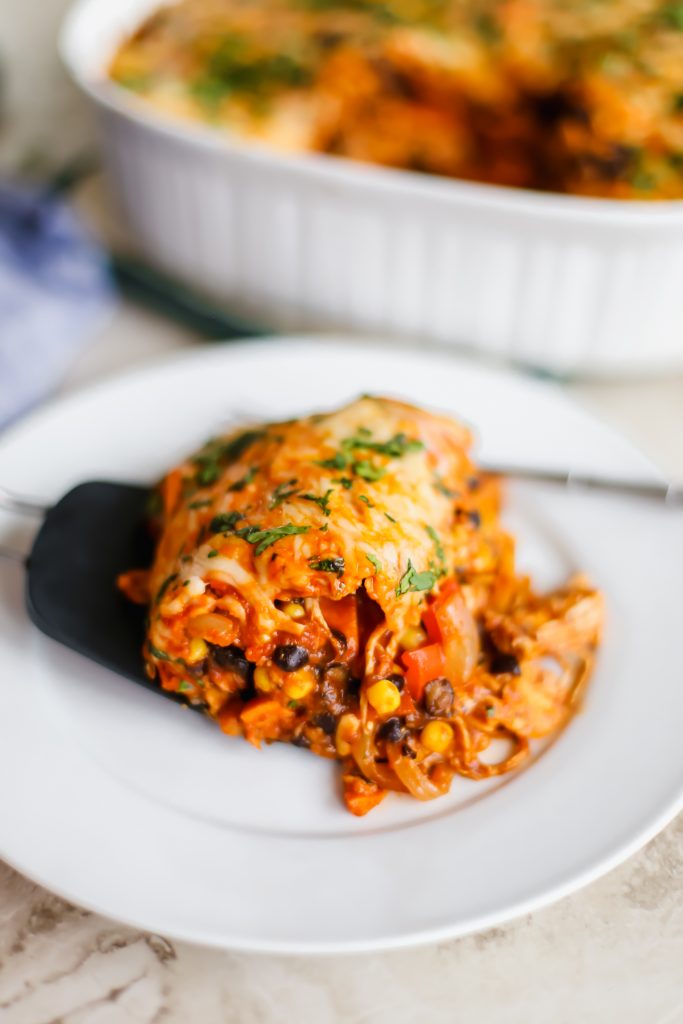 I also like this recipe, because enchiladas tend to feel kind of unhealthy – especially at restaurants. But this recipe is sneakily healthier. What do I mean by that? Well, it’s still covered in delicious cheese, so who wouldn’t want to eat THAT?! Meanwhile, underneath the cheesy surface is tons of veggies and lean protein. Onions, peppers, black beans, corn, sweet potatoes, and boiled/shredded chicken… so many good-for-you ingredients! 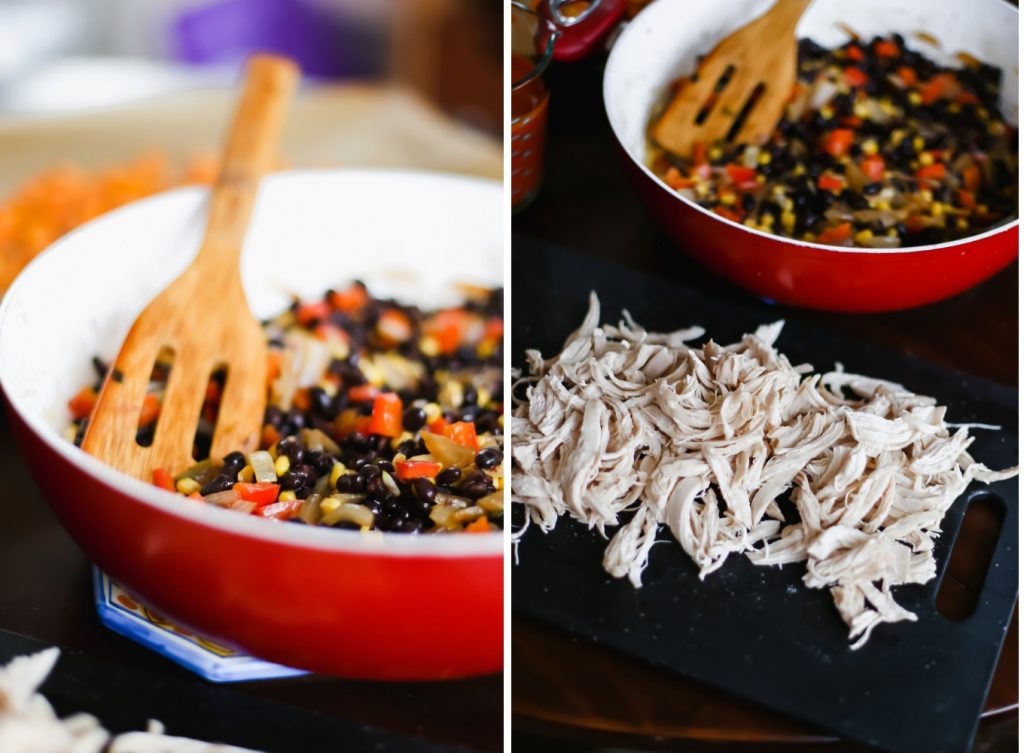 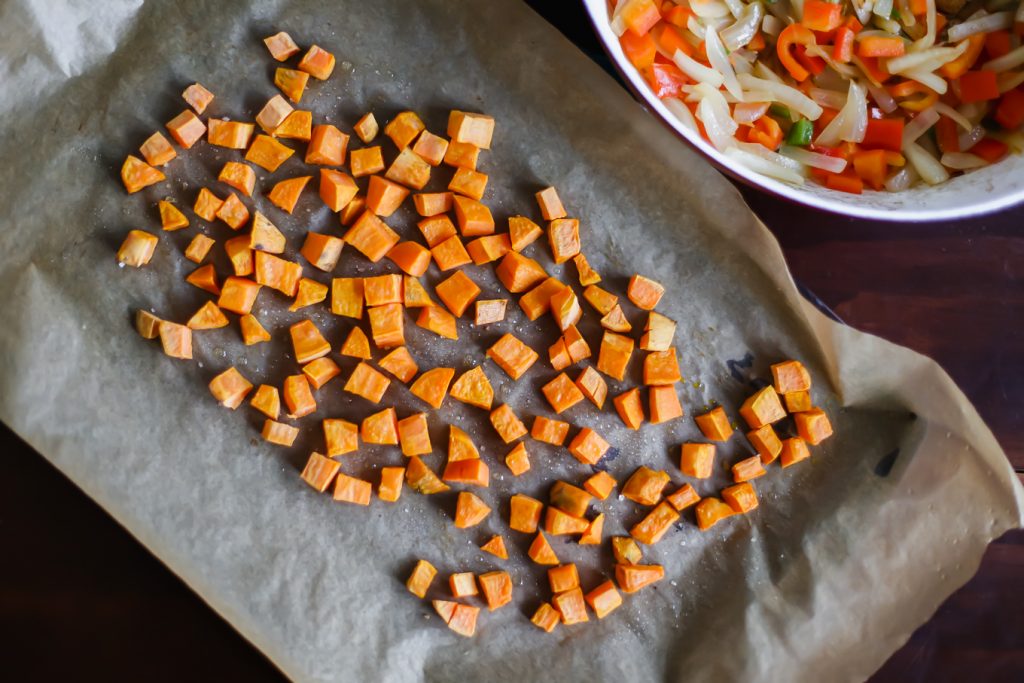 As for the enchilada sauce, I decided to take a shortcut when over 75% of you said that you don’t have an interest in making a homemade sauce ? I don’t blame you at ALL – there are so many great store bought options on the market right now! I used 3 pouches of Frontera Grill’s Red Enchilada Sauce and it turned out great. No stress!

That being said, if you’d like to make your own, there are a lot of awesome recipes all over the internet. I’d go for one by Cookie + Kate or Minimalist Baker. I’ve never made anything less than stellar from either of their sites! 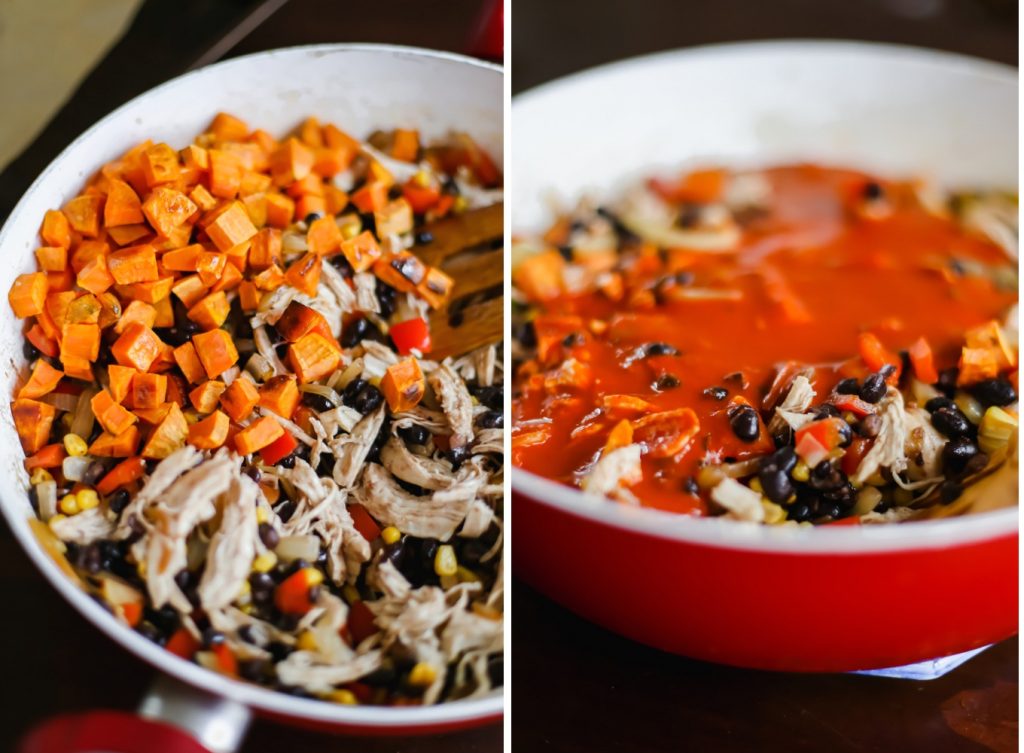 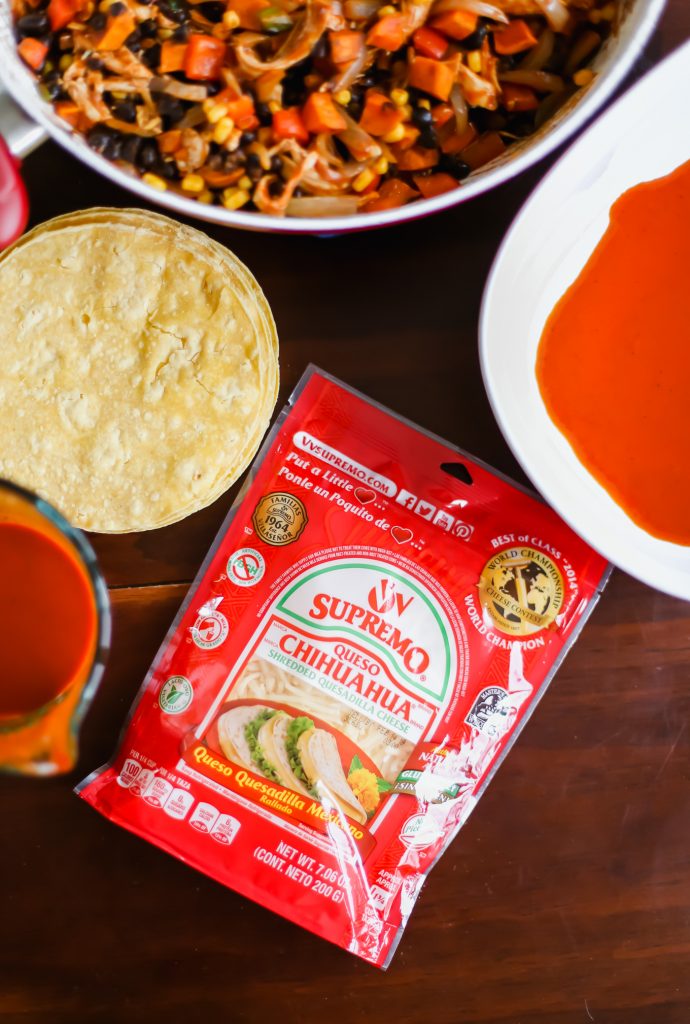 Once it’s time to build, don’t be afraid to rip the tortillas in order to cover your dish. For instance, I kept two of them whole, but then ripped the third to fill in the holes for each layer. 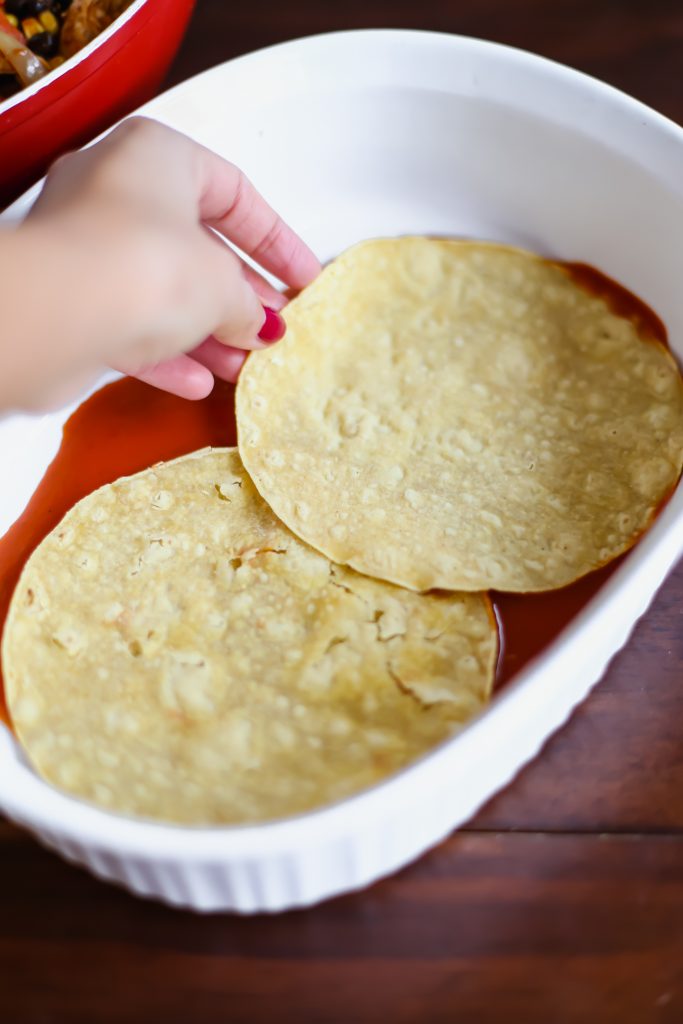 Then it’s time for that delicious filling… 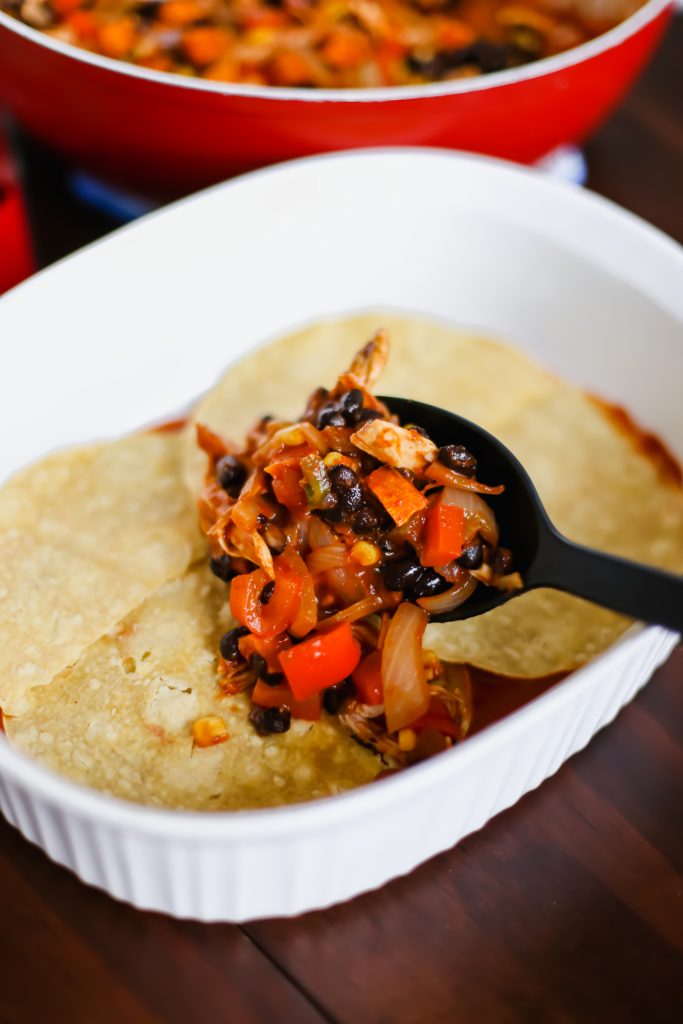 And of course, CHEESE! Seriously, if you’ve never tried V&V Supremo cheese, look for it when you make this – or even on your next Taco Tuesday night. You can find it right at Jewel-Osco, pre shredded and everything! 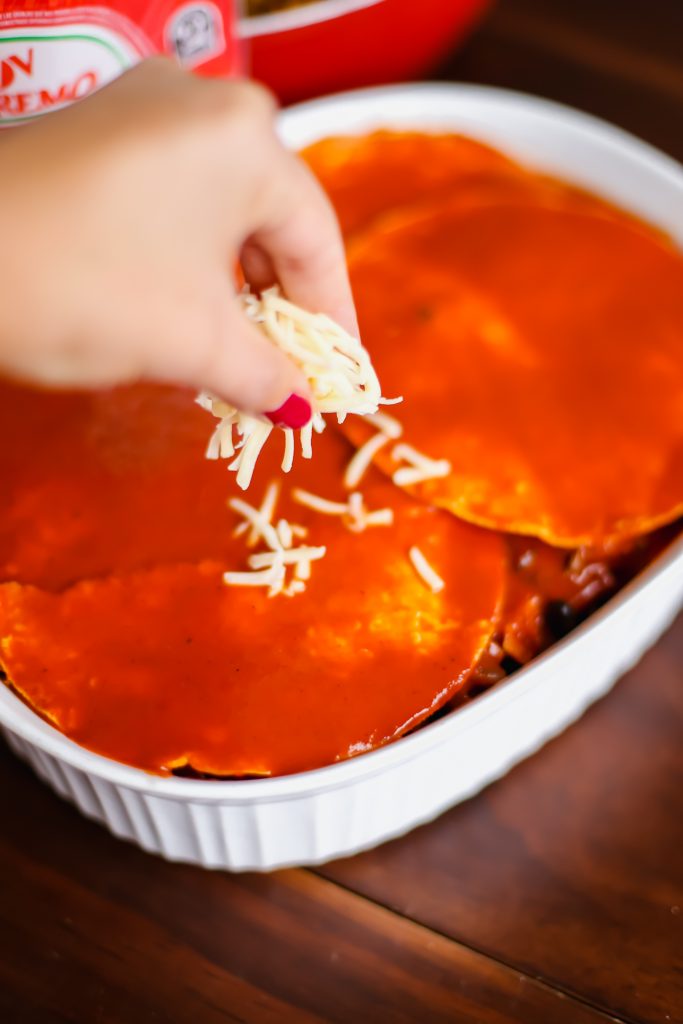 And after some time in the oven, it looks like THIS. Yikes, I’m getting hungry again. Lock it up, Lauren! 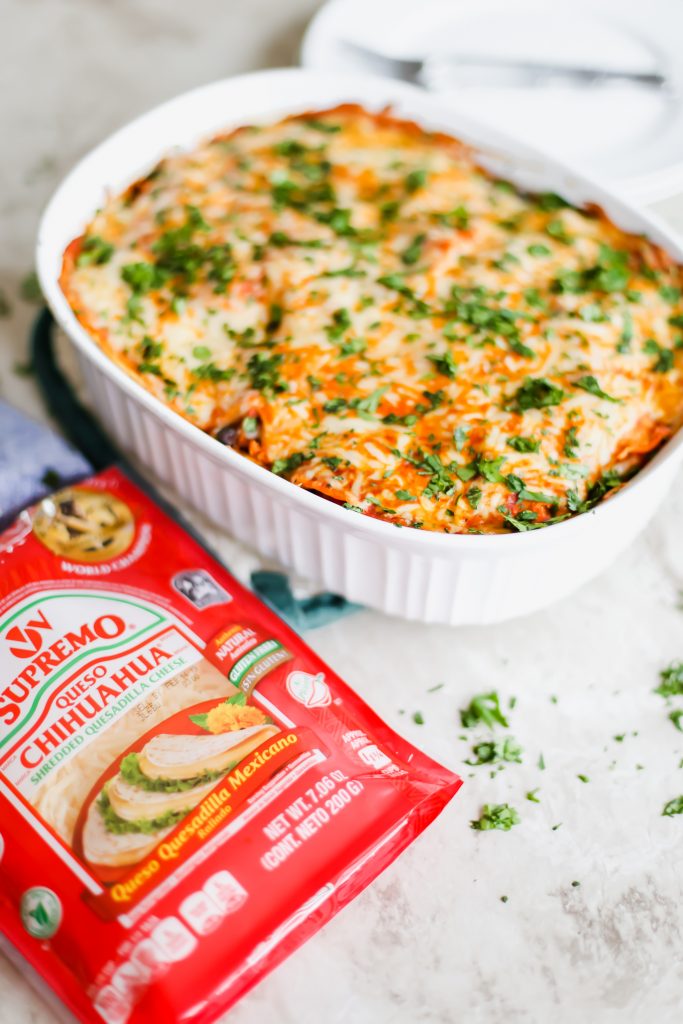 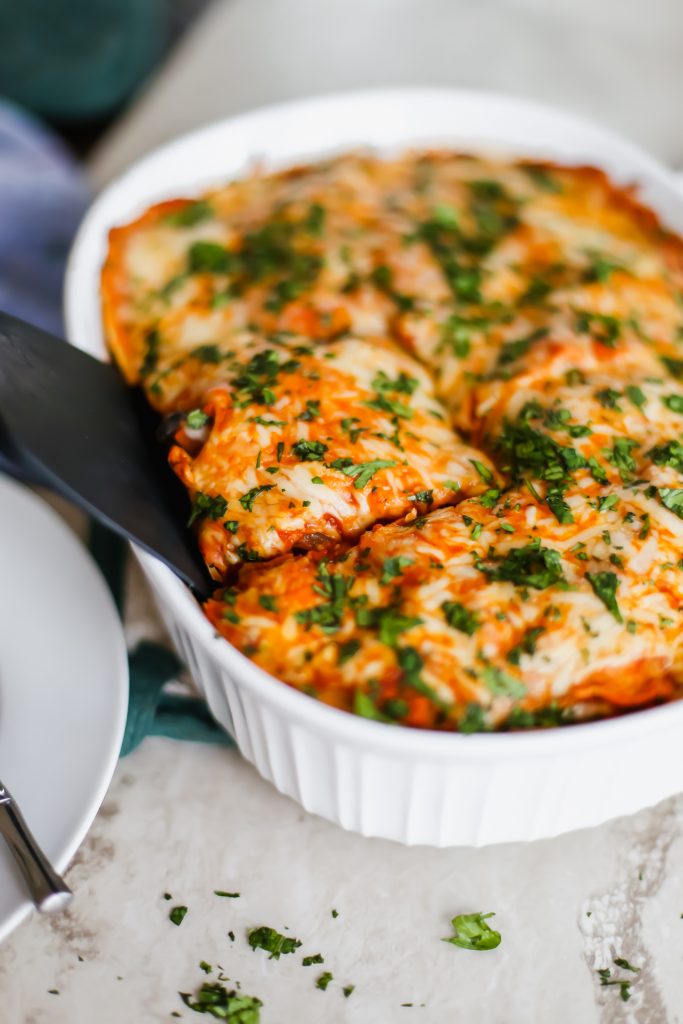 Seriously, you’re going to love this one. Plus, it makes GREAT leftovers – and doesn’t this sound better for lunch on a Wednesday than another salad? Same, guys. Same. 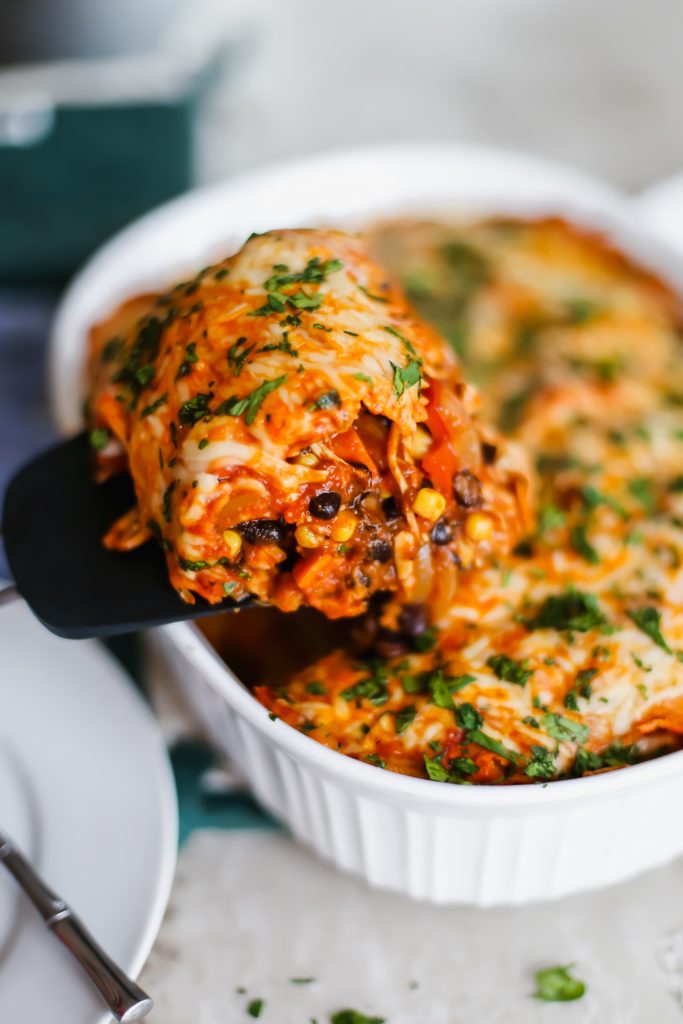 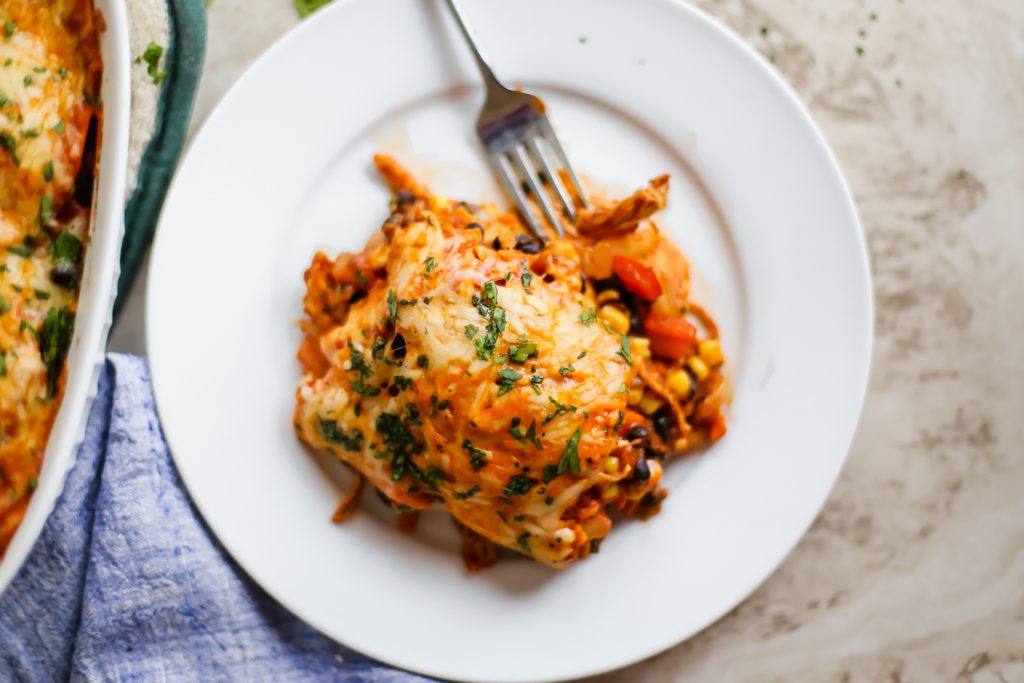 Have you ever made an enchilada casserole?

Or do you always roll them? What else do you put in them? I want to try all different kinds of fillings now! 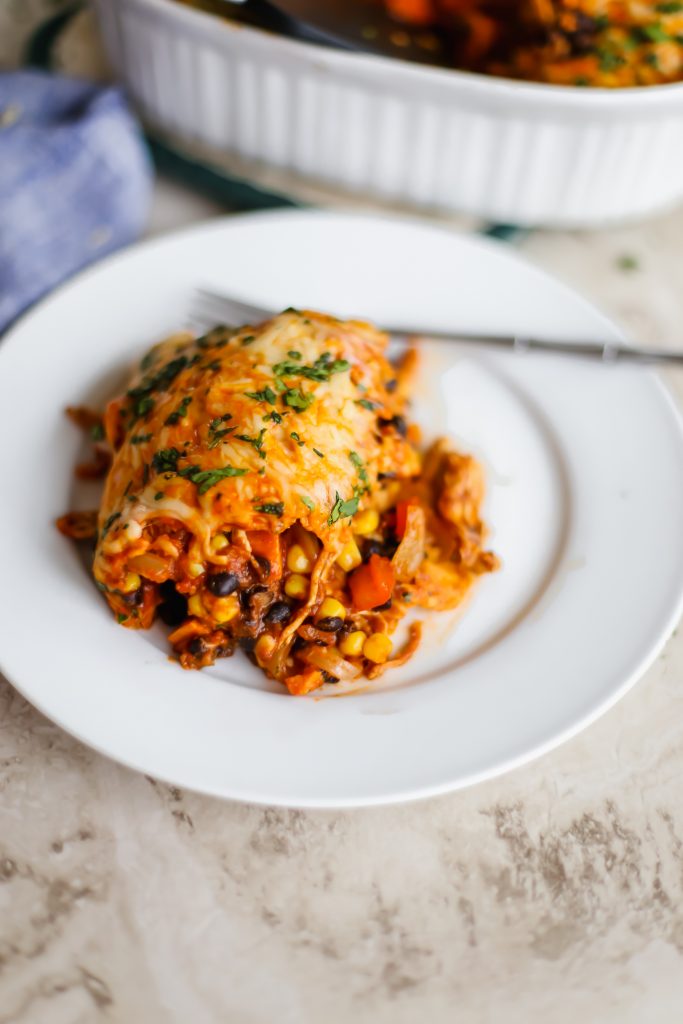 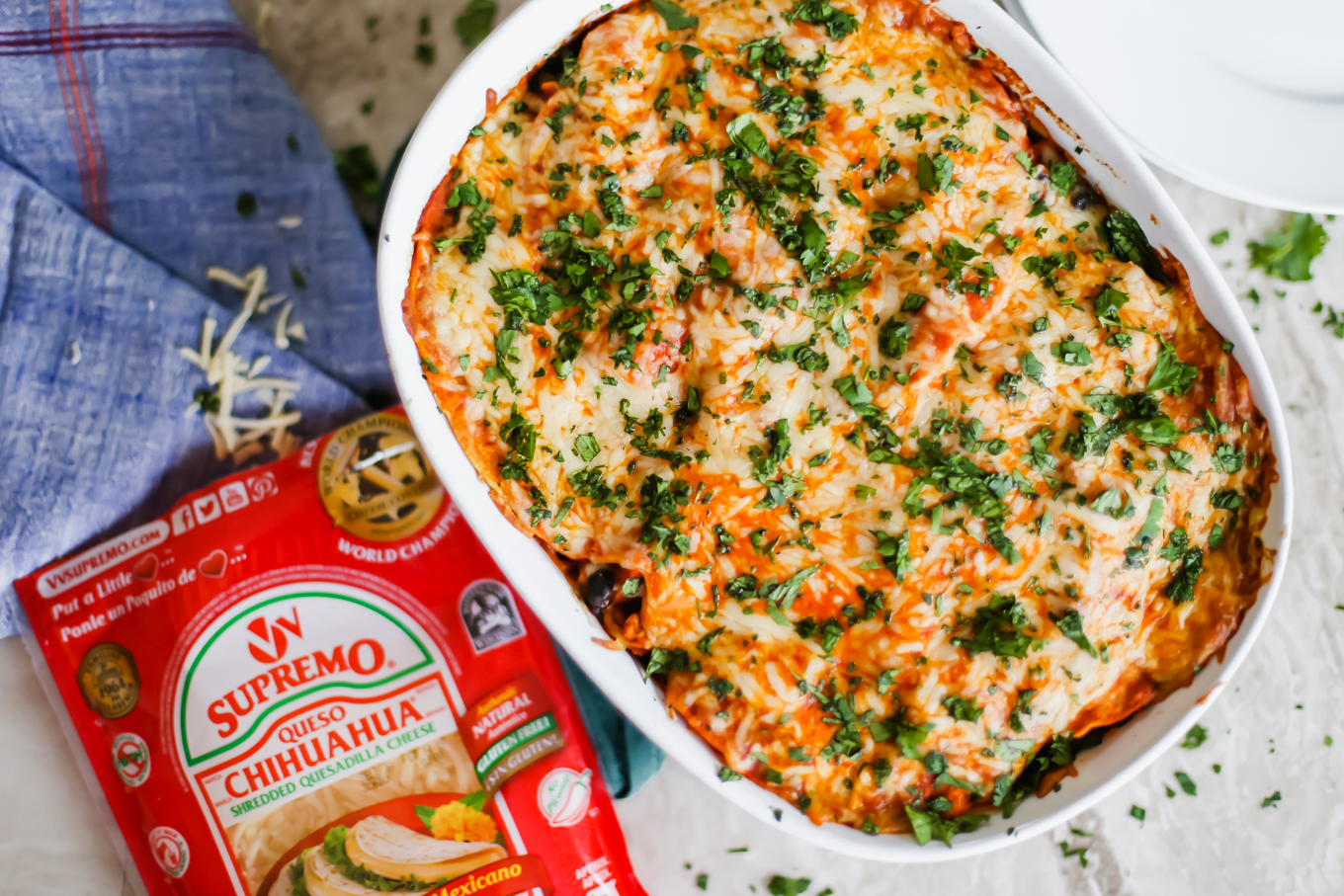 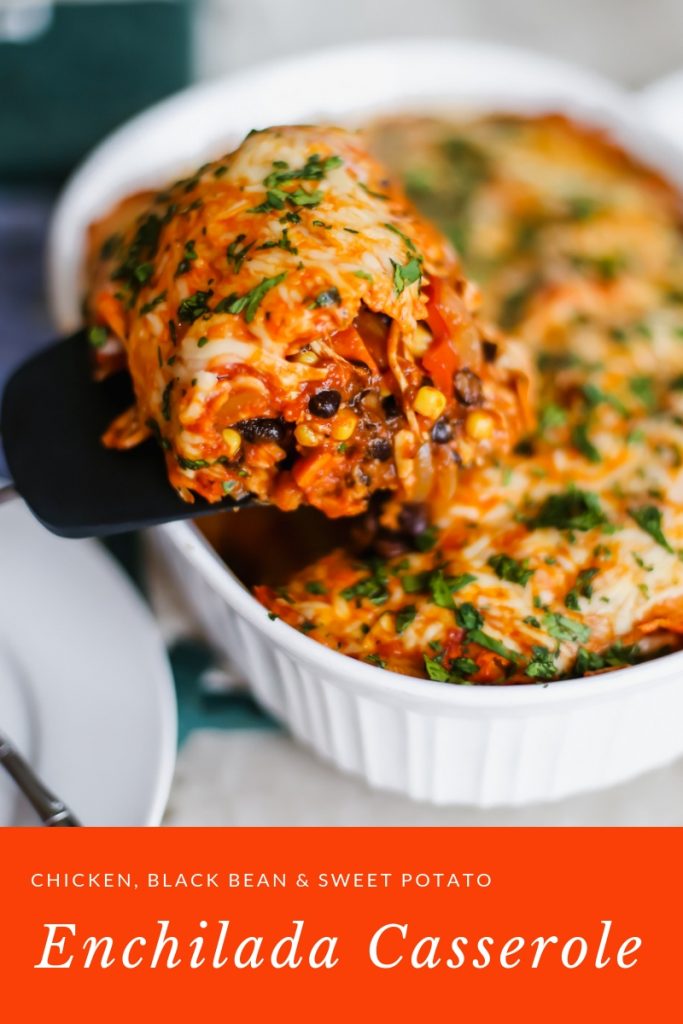 *This post was sponsored by V&V Supremo, but (as always) all opinions are my own. Thank you for supporting the companies that make Lake Shore Lady possible!