The Emmy Awards are on Sunday!! Most of you have heard me say this a lot, but I love award shows. The Emmys, Golden Globes and, of course, The Oscars are among my favorites. So, in anticipation of The 2013 Emmy Awards on Sunday, I thought I would try to predict some red carpet looks!!
The 2013 nominees for Best Actress in a Drama Series are kind of out of control. These actresses are all so talented and (lucky for this post) very stylish. The only thing that upsets me about this list is that Monica Potter isn’t on it. (Parenthood anyone?!) Ugh, I’ll get over it eventually.
So… let’s get started! 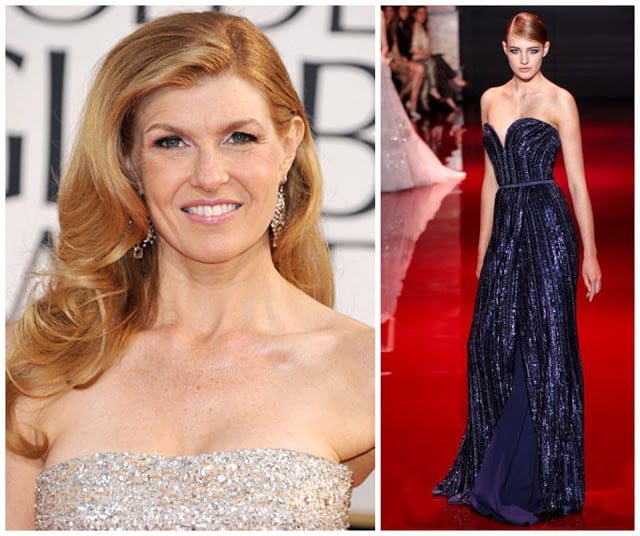 At first, I saw this Badgley Mischka gown and thought it was perfect for Connie. But a few friends reminded me that she’s nominated for Nashville… which means she has to show up with a little glitz, right?! I would love to see her in this Elie Saab gown. It’s more glam than country, but she would look like such a bombshell in it.
images from here and here
— 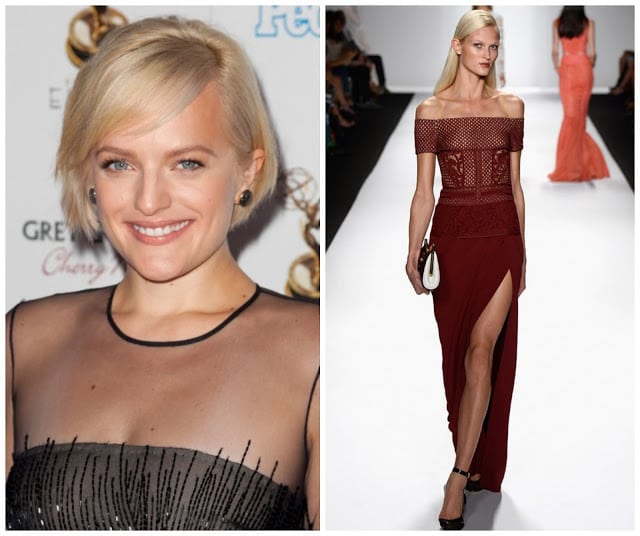 Elisabeth Moss
Prediction: J Mendel Spring 2014 Ready to Wear
Elisabeth Moss was surprisingly really hard to pick a dress for! I finally saw this J Mendel dress while sifting through pictures from New York Fashion Week and I thought it would be such a cool choice for her. The details, the structure… and how gorgeous would that color be with her blonde do?!
Images from here and here
— 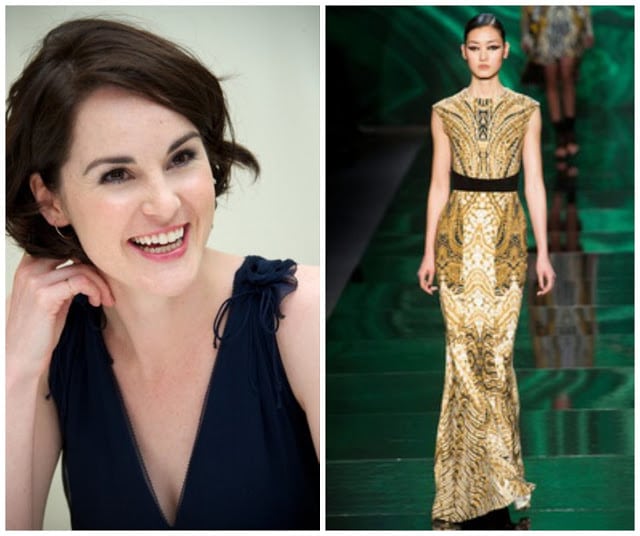 Michelle Dockery
Prediction: Monique Lhuillier Fall 2013 Ready to Wear
I must admit, because I love Lady Mary and Downton Abbey so much, I would probably squeal if she showed up in a dress like this Marchesa gown (so Downton, right?!). But Michelle is such a classic beauty that it would be equally as fun to see her in this gold Monique Lhuillier dress. A modern contrast to what we normally see her in, but I think she can pull it off.
Images from here and here.
— 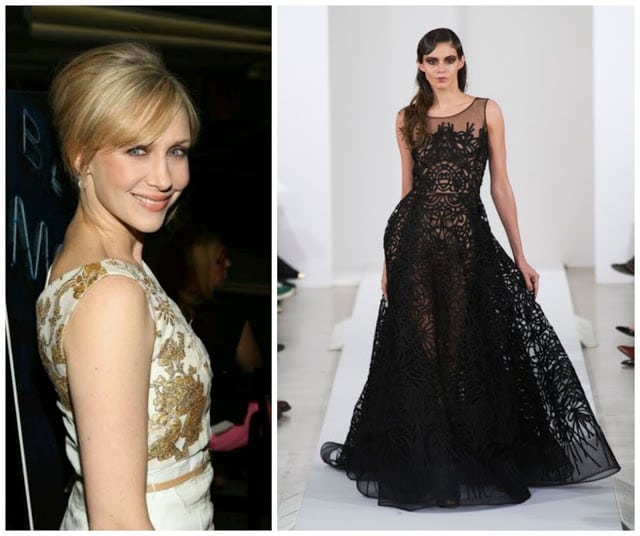 Vera Farmiga
Prediction: Oscar de la Renta Fall 2013 Ready to Wear
I loved this Oscar de la Renta gown when it first went down the runway- it’s so intricate and mysterious. Maybe it’s the makeup, but there’s something that’s a little creepy about it, too. And that’s exactly why I think Vera Farmiga should wear it. She would look gorgeous while still maintaining some of her nominated Bates Motel creepiness.
Images from here and here.
— 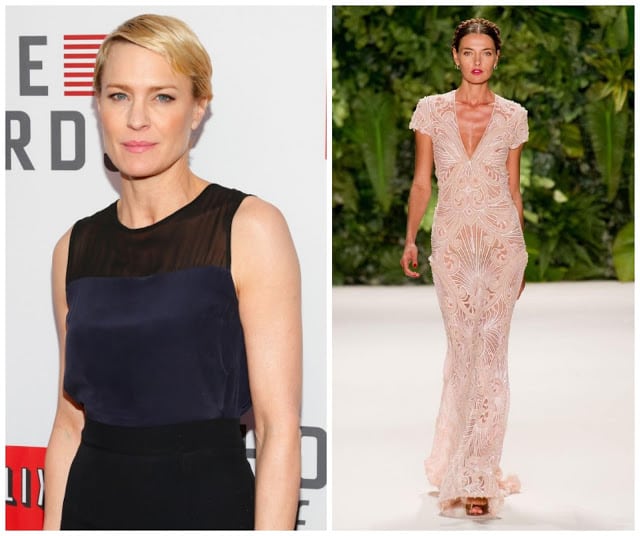 Robin Wright
Prediction: Naeem Khan Spring 2014 Ready to Wear
You know her from Forrest Gump and The Princess Bride and a million other things, but have you seen her on House of Cards?! Powerful, manipulative, and captivating. I love this Naeem Khan dress for her because there is a little bit of that sweetness from her days as an ingenue, but it also has that regal edge that she carries off so flawlessly on House of Cards.
Images from here and here.
— 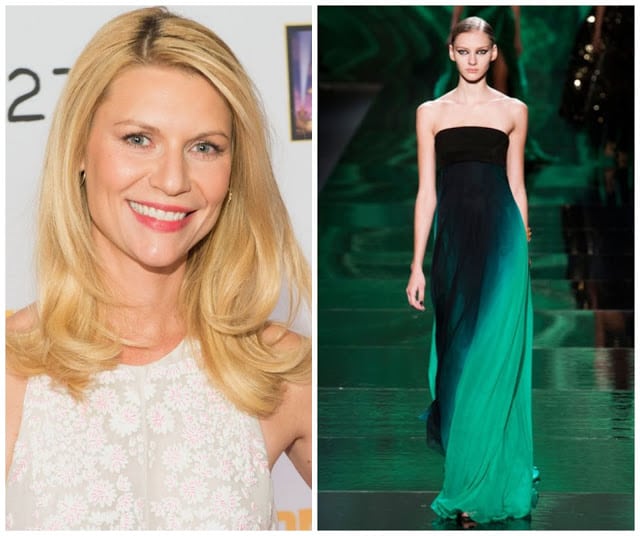 Claire Danes
Prediction: Monique Lhuillier Fall 2013 Ready to Wear
My favorite Claire Danes looks always include a simple silhouette. Evidence here, here, and here. But I love when she pairs that simple silhouette, beautiful hair, and perfect makeup with a BOLD color. She’s done red, pink, and yellow… so why not a little tie dye green?!
Images form here and here.
— 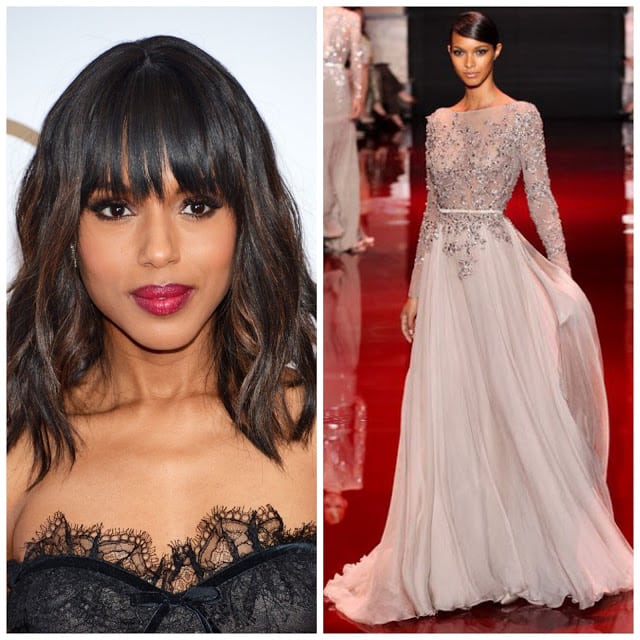 Kerry Washington
Prediction: Elie Saab Fall 2013 Couture
I saved Kerry for last because (1) I love Olivia Pope, (2) I would love to see her win, (3) she has the most amazing red carpet style, and (4) I had such a hard time picking ONE dress! She isn’t afraid to have fun with fashion, and I love the risks that she takes on the red carpet because they pretty much always pay off. And I’m not the only one who thinks her style is impeccable- People just named her the Best Dressed Woman of 2013! When choosing what she might wear, I resisted bold colors and went with this stunning Elie Saab dress… it’s not quite white, but I think it gives a nod to Olivia Pope’s white hat, right?
Images from here and here.
—
What do you think everyone will be wearing?! Who do you hope takes home an award on Sunday?? I’ll be watching, tweeting, and pinning!

What Shoes To Wear With Straight Leg Jeans