A big thank you to my friend Kate for doing this guest post!!!  She has made this recipe for me before, and it is beyond delicious.  You are going to want to pay attention.
—
This is my grandmother’s recipe for Quiche Lorraine, which traditionally has bacon in it. However, I always find that no matter what, the bacon becomes chewy and no one likes that! So one day I decided to switch out the bacon for some healthier options such as tomatoes, spinach and red onion. This is a quick and easy recipe for a delicious quiche that is ALWAYS a crowd pleaser- guaranteed! To go for an even healthier quiche here are some substitution ideas: skim milk instead of heavy cream, no melted butter, and whole wheat crust instead of white crust. However, I must say that I think the reason why THIS recipe is so good as it is, is because of these little indulgences- so as Donna and Tom from “Parks and Rec” say, “Treat Yo Self“!
Ingredients
4  organic eggs
2 cups of organic heavy whipping cream
1 cup of cubed gruyere cheese
1 cup of spinach leaves, stems removed
1 cup of grape tomatoes, cubed
1/2 cup of diced red onions
1 T of flour
a few dashes of nutmeg
1/2 tsp of salt
1 & 1/2 T of melted butter
1 Pillsbury frozen 9″ pie crust

—
Here’s what ya gotta do:
About 45 minutes before you’re ready to start, take the Pillsbury pie crust out of the freezer and let it thaw. Of course any quiche or pie is better with homemade crust, but if you’re usually in a time crunch like me, Pillsbury really does the trick!
Pre-heat the oven to 375.  Once the crust is soft, unroll it and line the pie plate. I like to pinch the edges to make it look a little fancier. I also poke holes with a fork in the pie crust to prevent air bubbles.

While the oven is heating up, put the crust in for about 10 minutes so the bottom of the crust gets a head start on the baking before you fill it up with cheesey-eggy-veggie goodness!
—
Cook the red onions in a frying pan (use some PAM) over medium heat for about 2 minutes.

Then add the spinach leaves – sans stems. Toss the onions and spinach around with some tongs for another 2 minutes until the spinach is wilted and the onions are tender.

After you’ve let the crust bake for a few minutes remove it from the oven.
Chop up the cheese and tomatoes.

Fill the crust with the gruyere cheese, tomatoes, onions and spinach.

In a large bowl whisk together the eggs, whipping cream, flour, nutmeg, salt and melted butter.  Strain the mix over the cheese and veggies in the pie plate.

Sprinkle paprika over the top and garnish with 3 whole spinach leaves – again trying to get fancy here!

Let the quiche sit for a while to settle and firm.

For tonight’s #LSLsupperclub, I made my Halloumi

A slow Saturday morning in bed with lots of snuggl

A Dwight Schrute approved recipe is on the blog to

Our new liquor cabinet came today and it is SO BEA

#LSLsupperclub No. 9: The One When Lauren Messed I 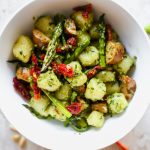