This Sausage Egg and Hashbrown Casserole is the perfect thing to make if you’re having guests over for brunch! 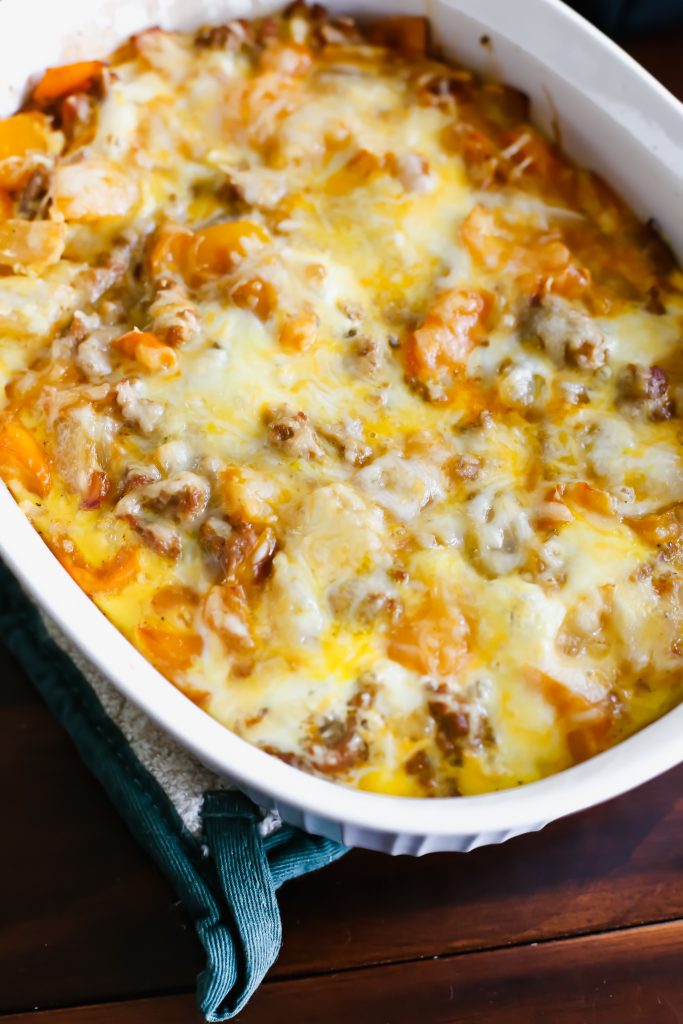 Hey friends! I’ll be honest, I know it’s only Tuesday, but I’m struggling a little bit this week ? First of all, I went to an all day bachelorette party on Saturday, and it was SO FUN but it took me most of Sunday to recover… #ThisIs32! Plus, Luna was starting to sleep until close to 6:30am last week which was AMAZING. I was waking up rested and feeling great… but this week, she’s back to waking up between 5:15-5:45am. I know it might not seem like a big difference, but I can feel it so much. Let’s just say, coffee is my best friend again!

But let’s talk about this recipe, shall we?! I never used to make anything like this, but Adam’s friend came to stay with us a few months ago and I thought I’d give it a go since we had eggs, a small amount of shredded cheese, sausage and hash browns… and nothing else. It turned out so good that I knew I had to try it again when I could bulk it up with some more flavors.

We are big fans of peppers and onions in this house, and they’re so delicious in this casserole. But the best thing about this recipe is that it eliminates any need for you to be stressed in the kitchen when you have people over! How often have you though “scrambled eggs are easy” but then regret it when you’re actually making them for 6 people? Don’t over cook them, but also make sure the hash browns don’t burn! And does anyone need toast?! Is the bacon still hot? Ahhhh!

Instead, the eggs, meat, veggies, and potatoes are all in one lovely dish. Take it out of the oven, let it cool for a second while you pour your cup of coffee (or a mimosa!), and then enjoy yourself! After all, brunch isn’t supposed to be stressful, right? 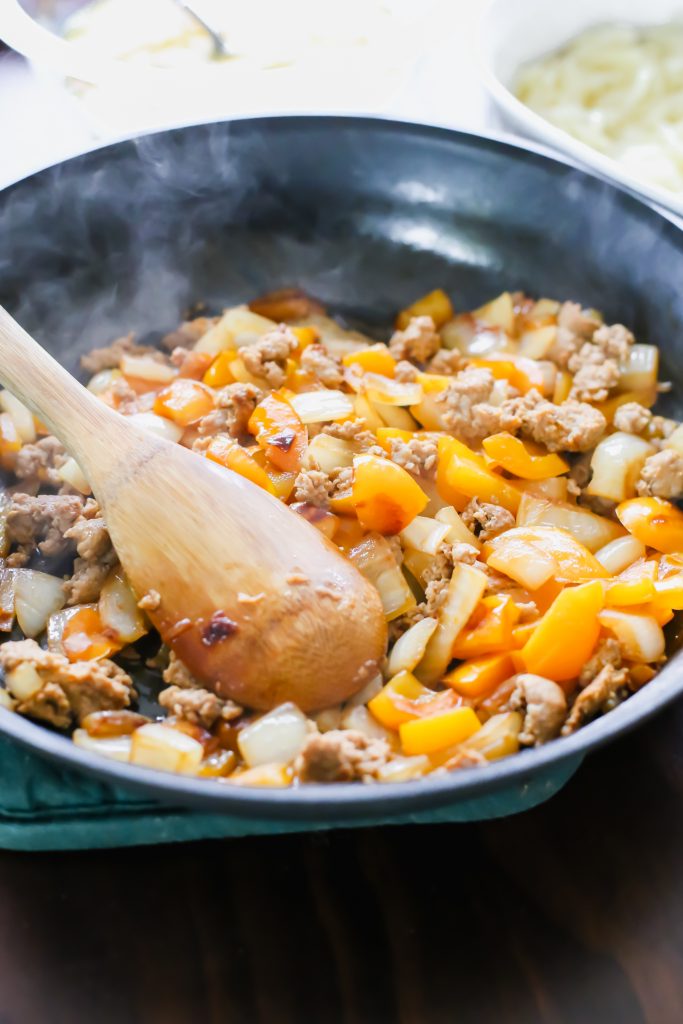 How To Make An Egg Casserole With Sausage & Hashbrowns

Remove sausage meat from the casing and brown in a large skillet over medium heat, crumbling as it cooks through. Remove and put the meat in a separate bowl.

Chop the peppers and onions.

Add to the pan that you cooked the sausage meat in. Cook for 5 minutes, or until the vegetables start to soften.

Grease a 7×11 baking dish with cooking spray. Add a layer of thawed hash browns on the bottom.

Layer the browned sausage, peppers and onions on top of the hash browns.

In a separate bowl, whisk together eggs and milk together. Season with salt and pepper.

Pour egg mixture into the casserole dish, over the hash browns, sausage, peppers and onions.

Sprinkle cheese on top. I use just enough to cover the mixture.

Bake for 45 minutes, or until the eggs have set.

Cool for 5 minutes before serving. 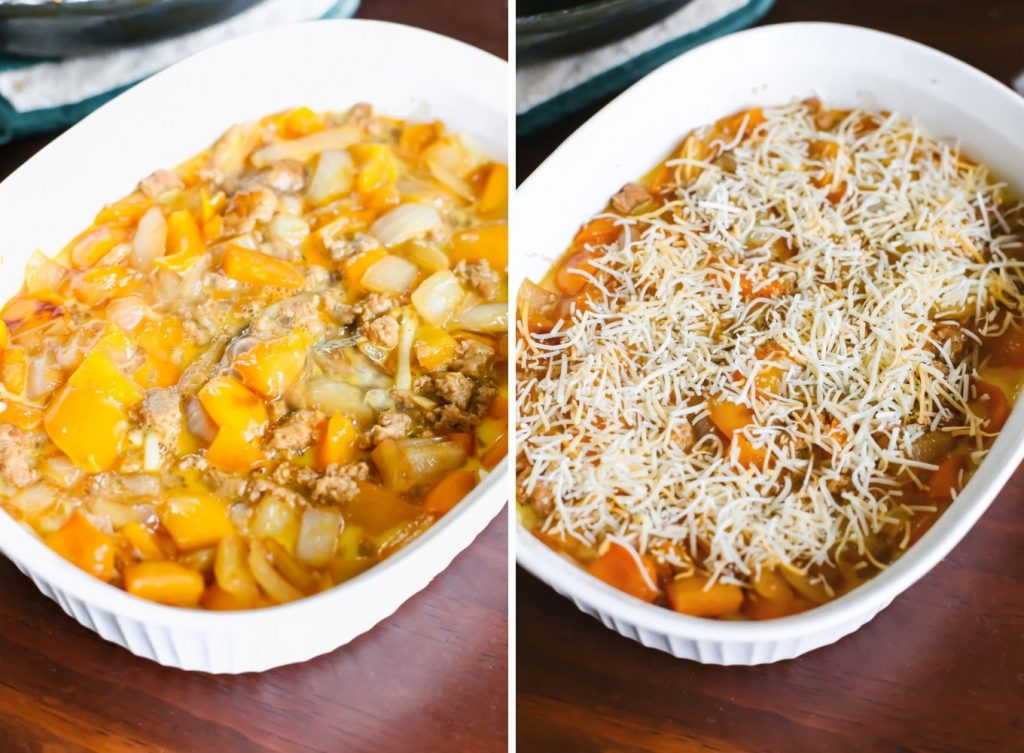 How To Serve This Breakfast Casserole

As I mentioned, one of the best things about this casserole is that it’s ready for your guests as soon as it comes out of the oven! That being said, it’s always nice to have some extra additions on the table.

I like to set out hot sauce and sliced avocado – and salsa would be good, too! You could also sprinkle some fresh herbs on top (parsley would freshen it up a ton!). As for sides, I think a big bowl of berries works best – especially now that they’re in season! I also made Kodiak Cakes Protein Muffins the last time I made this for friends. I used this recipe with chocolate chips so it felt a little indulgent. 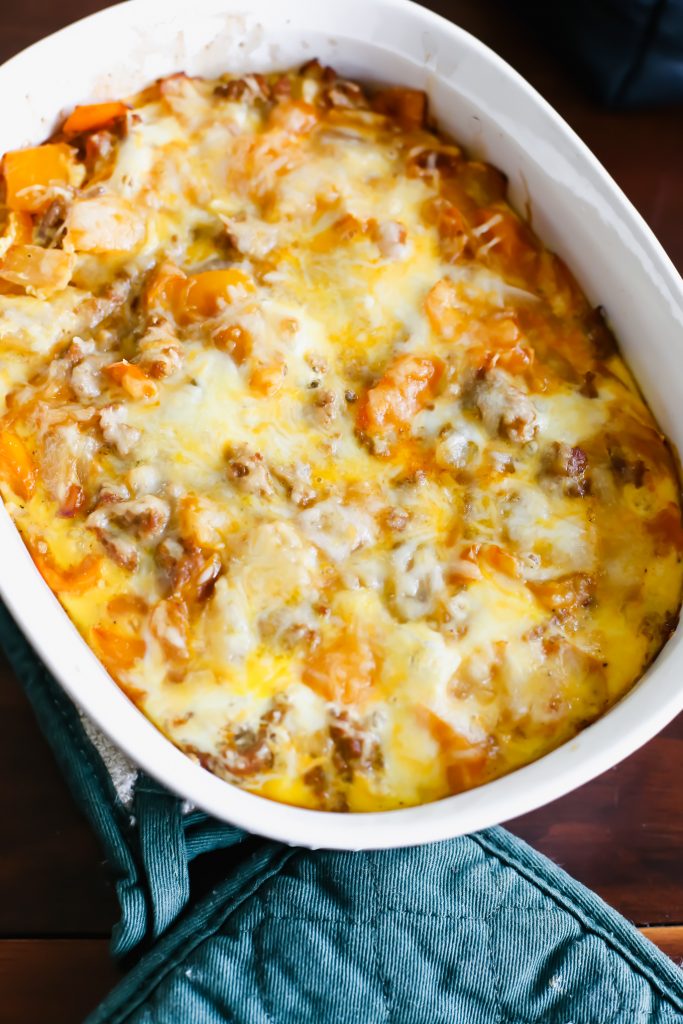 Check to make sure your eggs are done cooking before serving! Some ovens work differently and you don't want to serve uncooked eggs to your guests!

You can definitely play around with ingredients in this - just be aware of the water content in whatever other vegetables you add. 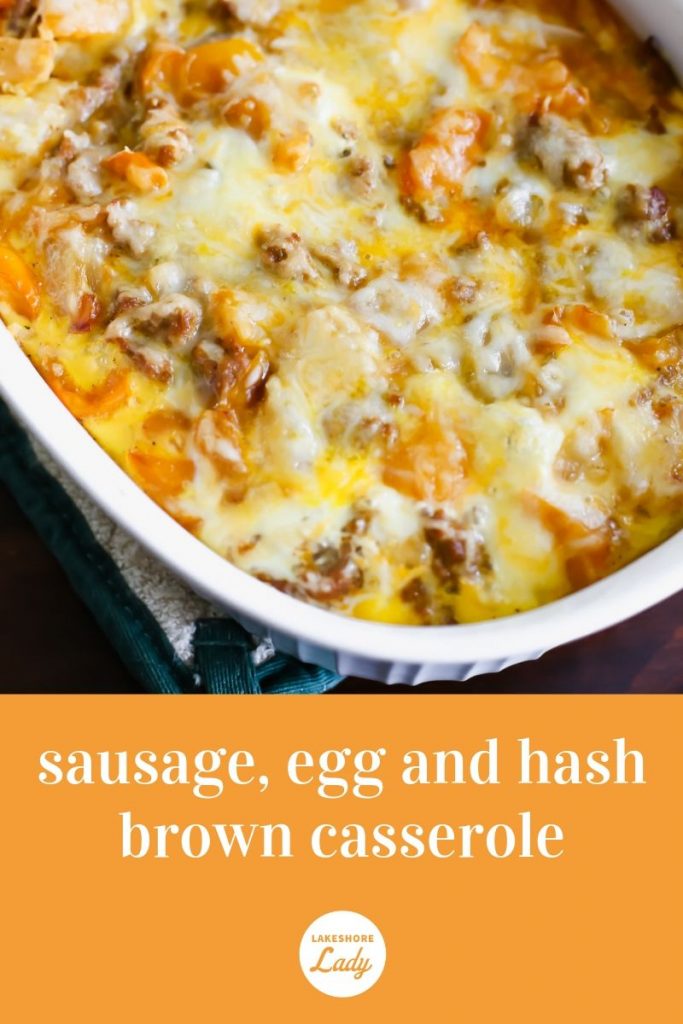 Do you guys like entertaining for breakfast/brunch? Would more recipes like this be helpful? Or do you prefer breakfast recipes for less people and practical weekdays more? Seriously, your feedback is SO helpful, so I’d love to know!

I’m usually so boring when it comes to breakfast – I stick to yogurt bowls, smoothies/smoothie bowls, or oatmeal 90% of the time! We usually make simple eggs and potatoes over the weekend, but we’ve really been loving Kodiak Cakes pancakes, too! The cinnamon oat flavor is my favorite and I get it on Thrive Market. I’ve seen a bunch of their stuff at Mariano’s and Jewel too – but they’re less expensive on Thrive… and who doesn’t like saving a little money?!