In the mood for a festive film? Here are the best holiday movies on Netflix, Hulu, and Disney+! 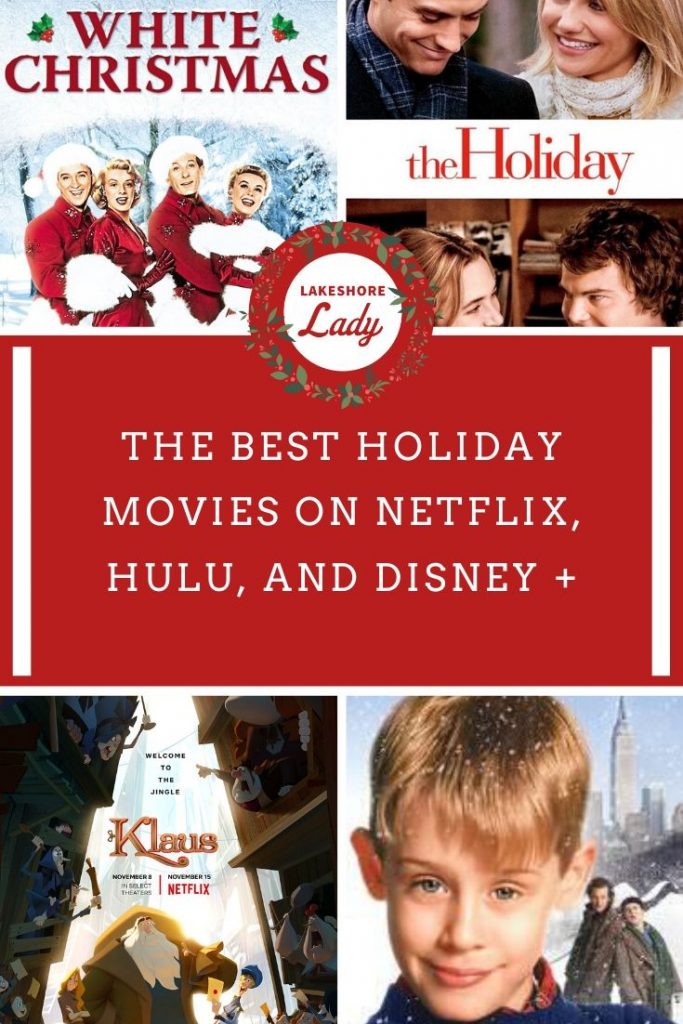 Now that it’s officially December, I am all about holiday movies. I love watching everything – from the super corny/borderline terrible ones to the feel good classics that never get old. And since all of us are watching everything on streaming services instead of DVDs (or VHS tapes!) now, I thought it would be helpful to round up the best holiday movies on Netflix, Hulu, Disney+, HBO Max and Amazon Prime!

If you haven’t seen this classic, change that RIGHT NOW. It’s delightful and sweet and you’ll fall in love with Bing Crosby!

Adam and I watched this last year and we were so impressed. It’s an animated movie with some major talent in the voiceover cast and lovely lessons for kids. Definitely a new favorite that we’ll watch again every year!

Single All The Way

When I say I loved this movie, I looooooooved this movie. I was expecting it to be ultra cheesy, but it turned out to be a really well done rom com. The cast is amazing (Michael Urie! Jennifer Coolidge!) and the story was adorable and heartwarming. Loved every minute!

This is another new rom com that surprised me – in a good way! It’s about journalist in LA who meets a seemingly perfect guy on a dating app. Since he lives on the East Coast, she decides to hop on a flight and surprise him for the holiday… only to discover that she’s been catfished. Hilarity ensues after that as they both continue to lie for each other, but the ending is really really sweet. (Also, Heather. McMahan is in it!)

We also loved this new-ish holiday movie – I mean, Kurt Russell as Santa?! And Reese Witherspoon’s daughter from Big Little Lies plays the main character, and she is adorable. Not the best movie in the world, but a fun holiday flick!

Update: we watched the sequel, and it is nowhere NEAR as good as the first one. I don’t think we’ll be re-watching that one!

We haven’t watched This one yet, but it’s on our list this week! It’s about a boy named Nikkolas who is searching for father after he went on a quest to discover the fabled village of the elves, Elfhelm.

Okay this isn’t actually a movie, but this 8 episode limited series is so cute, I HAD TO include it. It’s about 2 teens in New York City who interact with each other through a notebook… and it is EXACTLY the kind of thing I want to watch during the holiday season. Sweet, quirky, heartwarming. It is darling.

This new holiday musical is about a toymaker who was betrayed by his apprentice years ago. His granddaughter starts to learn about his past and wants to help him find inspiration again. The production numbers were my favorite part!

I don’t know who decided Vanessa Hudgens should be the new darling of holiday movies, but I am HERE FOR IT. The first one is terribly cheesy and perfect for a cozy night in with a big glass of wine… and honestly, so are the two sequels.

The Knight Before Christmas

Two strangers discover that they have a common hatred for the holiday season, so they decide to be each others’ holiday plus ones. No strings attached, no feelings, just a guaranteed date for holiday events. I wanted this one to be a little bit more Christmas-y than it was (it covers all of the holidays throughout the whole year!), but it was still a fun rom com!

How The Grinch Stole Christmas

I personally like the classic animated version way better, but the live action version with Jim Carey is available on Netflix!

Christmas with the Kranks

I’ve never seen this one, but a bunch of you said it’s a favorite! Starring Tim Allen, Jamie Lee Curtis, and Dan Aykroyd.

I watched this last year when I was in the mood for a cheesy movie and I thought it was cute! It’s about a photographer who inherits an antique Advent calendar… and of course there’s romance mixed in. DUH.

This definitely isn’t on Hulu year round, but it looks like it’s available right now! Go go go!

If you’ve never seen this movie, please watch it this Christmas. It’s a classic for a reason!

I watch The Holiday every year and I never get sick of it! It always makes me laugh how bad Cameron Diaz in contrast to how INCREDIBLE Kate Winslet is in this film – but it doesn’t even matter. It’s adorable and heartwarming and I love it. Nancy Meyers can do no wrong!

This original film is new this year – and I loooooved it. It’s about a woman who brings her girlfriend home to her conservative family, but introduces her as her platonic friend since she hasn’t come out to them yet. The cast is incredible, one her sisters had me cackling every time she spoke, and I cried at the end because it was so heartwarming. Such a great holiday movie!!!

This is another favorite of mine! I have distinct memories of watching this Tim Allen movie when I was younger – and Adam and I can both recite a lot of the lines by heart ? So good!

If you enjoyed the original Bad Moms movie, then you’ll love this one. I find that real Moms find it especially hysterical 😉

While the Jim Carey version doesn’t excite me, this animated version brings me right back to my childhood! If you have kids, or nieces/nephews, you have to watch this with them!

I’ll admit, A Christmas Story isn’t at the top of my personal list – but I can’t deny that there are some iconic moments. When Schwartz gets his tongue stuck on the frozen pole, Ralphie’s bunny onesie, the leg lamp… it’s pretty funny.

We haven’t seen this one, but a few of you recommended it as a cute animated option! It’s about Santa’s son Arthur who helps get Christmas back on track after their high tech operation has a glitch. Looks fun!

I watched this Lea Michele movie last year and it was definitely one of those “so bad, it’s good” movies. Basically, Lea has been going to Hawaii with her family every Christmas since she was very young, and that’s where she met and fell in love with Jeff (played by Charles Michael Davis from Younger!). After a family tragedy, Jeff stopped going to Hawaii – but then he shows up again! Sparks fly! But there are other significant others involved! Will they ever get together?! ?

I haven’t seen this yet, but it sounds like it’s a silly comedy about Joseph Gordon-Levitt, Seth Rogen, and Anthony Mackie behaving badly on Christmas Eve.

Out of all the new holiday movies out there, this is definitely the most fun! Anna Kendrick is adorable, Bill Hader is hilarious, and Billy Eichner is in it, too!! I loved every minute of it, and then watched it again with Adam a few days later. Highly recommend!

I mean… duh. This childhood classic has stood the test of time in a major way.

Unpopular opinion, but I like Home Alone 2 even better than the first one! Maybe it’s because I lived in New York and I love seeing Central Park and the Upper West Side? No matter which one you like best, we can all agree that they’re both great.

In case you don’t have Hulu, you can watch this on Disney+, too!

I haven’t seen this movie in YEARS, so I’m really excited to watch it again this Christmas!

Remember when Michael Caine was Scrooge in a version of The Christmas Carol with the muppets?? That happened! Definitely rewatching this over the next few weeks.

It’s not Christmas without a viewing of Elf! Will Ferrel and Zooey Deschanel are so adorable in this movie, and year after year, it just never gets old!

This is another one on our list for this week! It’s set I suburban Chicago in the late 1980’s, and it’s about a 10 year old boy on a quest to get the latest video game system for Christmas.

I’m not sure why HBO labels this as a comedy because I sob every time! That being said, there are lots of funny and sweet moments with this all star cast… just don’t forget your tissues, too!

This isn’t one of my personal favorite Tom Hanks movies, but it’s a great choice if you have kiddos!

This cute rom com stars Emilia Clarke from Game of Thrones and Henry Golding from Crazy Rich Asians, so… need I say more?!

There are a TON of holiday movies for rent and purchase, but these are two that you can stream for free that aren’t on other platforms!

In my adult life, I’ve realized that a LOT of people consider Die Hard a Christmas movie – who knew?! I finally watched it again with Adam, and if people want to call it a Christmas movie, that’s fine with me. It’s just not the movie I would choose when I want to get in the holiday spirit 😂

You can’t help but love the Griswolds and their crazy antics! We just watched this one again recently and it really is hilarious.

Did I miss any of your favorites?

Let us know in the comments!!

Petite Winter Coats for Women (That work for taller gals, too!)