Why I Quit My Job To Become a Full Time Blogger 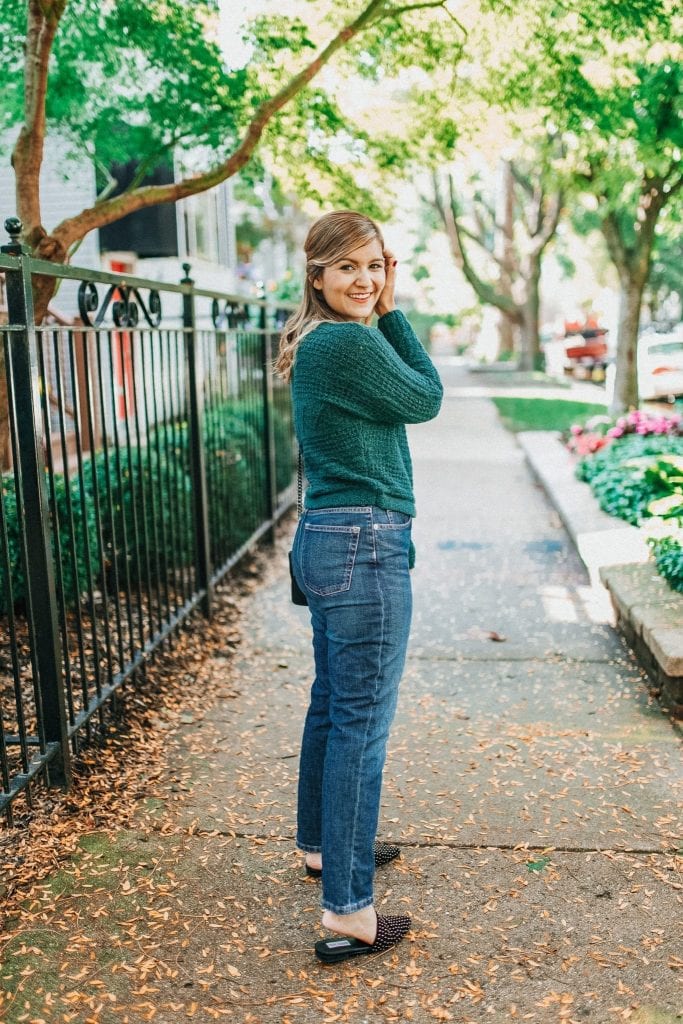 Some of you may have picked up on this on insta-stories or when I’ve snuck mentions of it in blog posts, but at the end of August, I officially quit my job! Like any big decision, it’s scary, but it’s also super exciting. Obviously, both internal and external questions have presented themselves as I made this decision. “Are you sure you want to give up that stability?” or “What about insurance?” And on the other end – “What took you so long?!” Honestly, most of the questions other people asked me were things I had already thought about over and over and over… (I don’t overthink things, I don’t know what you’re talking about?)

So why DID I wait so long to take the leap? And what made me actually do it? Well, those are loaded questions with a LOT of answers. So I thought I’d lay it all out here, in case anyone else is thinking about becoming a full time blogger – or just thinking about taking a leap and making a change!

You can read a little about my life before Chicago on my About page, but the main thing you need to know is that I was struggling actress. I worked on a few shows while living in New York, got my Actor’s Equity card, and then I just stopped booking jobs. While auditioning, I was working at a boutique and babysitting… aka barely getting by. So, when I moved back to Chicago, I had no idea what to do next. I kept auditioning and working at a boutique in the Gold Coast for a little bit, but when my Dad asked if I’d be interested in doing a little work for his company, I swallowed my pride and took the opportunity.

Now, this isn’t a detail I’ve shared very often – mostly because so many people out there are quick to judge. But his company had less than 20 employees and they needed the help. Not to mention, I needed to figure out where my place was in the world outside of the theatre. That was over 5 years ago.

Since then, the company now has nearly 100 employees and has grown beyond expectation. I went from a consultant, to a part time employee, to a full time employee, to being on a committee of 3 who planned and executed their first and second annual multi-day user conference for about 300 people here in Chicago. And while I’m so proud of everything I did, I always knew that my time there was limited. As the company grew, it became clear to me that I wanted the marketing department to thrive because of people who weren’t members of the Nolan family. That was always extremely important to me and a huge motivator to turn Lake Shore Lady into what it is today. So now that you know that…

The reason why I told you that backstory is because I know what it’s like to NOT have stability. To need to pick up extra shifts or babysitting jobs just to scrape by. To finish a run of a show and then say “Well, now what?!” ?  So, to have a steady income, even if it wasn’t a crazy amount, was a really nice change for a while. Even when I was part time, I knew exactly how much money was coming in each month from my job and I could budget according to that + a small projection of my blog income to be safe. Stability is hard to turn down, not gonna lie.

It’s just all so confusing and expensive and scary. I figured I should hold on to insurance for as long as I could. Did I mention how confusing it all is?

Coming from acting jobs, retail, a brief stint as an assistant, and a few other random jobs along the way – before 25, I had never actually worked in a corporate environment. I kind of viewed getting a 9-5 as my version of “giving up.” But being a part of a company’s growth, collaborating to push things forward, taking pride in the projects I never thought I could do. Let’s just say, it’s been more rewarding that I thought it would be.

But even though I could work from home a lot, and I tried to cut back to part time a few times, it was still a lot of work. So, when combined with the growth of Lake Shore Lady, there were many “seasons” when I was essentially working two full time jobs. One on it’s own? Fine. Both together? Woof.

Before you think I’m complaining, I’m actually really grateful for this time. I hear a lot of bloggers talk about how much work is required to be successful. And they’re not wrong – it’s a LOT of work. But it’s so much fun and we are SO lucky we get to do it. Juggling both and pushing myself to get it all done gave me an appreciation for the work that I really love, and perspective about how hard so many of YOU are working every week.

For example, the week before our big event in June, I shared my stress on insta-stories. Pretty sure I said “I feel like I could cry or punch someone” (?) and ended with something along the lines of “I”m not sharing this to complain, just wanted to say that if you’re having a rough week too, I feel ya.” My inbox was quickly filled with so many messages saying that they felt that way yesterday, or that was them today, too. I realized that I have so many smart career-driven women following this blog, and I’m so glad that I can relate to their (YOUR) struggles and triumphs.

As you’ve probably gathered by now, “saving” was not a part of my first 5 years out of college. Every penny went to rent or pasta and broccoli (my go-to budget dinner ?). So the fact that I could actually save these past few years has been AMAZING.

I’m not saying you have to have money in the bank in order to go after your dreams. But it does make me feel a LOT better about this decision knowing that I did my best to put money away when I could. This way I don’t need to freak out if one or two months fall shorter than what I was expecting.

I knew if I quit too soon and money was a driving factor, I’d want to take every opportunity that comes into my inbox, whether it’s the right fit or not. And I never want that to be the case. I want to take on collaborations that I’m excited about, and that I think will be interesting for you guys, too!

I needed to find my voice.

If you go back to old posts, you’ll see that my photos were awful, there was barely any text, I didn’t have a mission or purpose – eek! But over the past few years I’ve learned so much about myself and the person I want to be. And even more than that, I’ve learned how I want to connect with all of you. If I had taken the leap and gone full time before I had figured all of that out, I’m not sure it would have worked out as well. But now, I have a clear vision of what Lake Shore Lady is and where I want to take it.

What Made Me Finally Quit

Quite honestly, I realized that I was preaching about self care… even when I wasn’t actually taking care of myself. I was working all the time, I was stressed all the time, and that stress was manifesting in different areas of my life. On top of that, I was working out less, I wasn’t eating as well, I wasn’t sleeping as much as I should – you get the idea. I knew what I should be doing to feel my best, but I didn’t have time to do it.

So I finally sat down and asked myself if it was actually worth all the stress. And the answer was no. Lake Shore Lady’s income had already surpassed what I was making from my job… so why was I torturing myself? As Ron Swanson says “Never half-ass two things, whole-ass one thing.”

I want to create more intentionally.

Don’t get me wrong, everything I post is intentional. But there are only so many hours in the day. So, when life got busy, there were times when I just had to get it done. Or not post at all. Or post something I didn’t really love but was the best I could do because I’m only one person! ?

But going full time will allow me to create the type of content I’m proud of, and do more of what YOU want to see! Remember those polls I did last week? I looked at all of those results and suggestions, compared them to everything I wanted to post about, and created a rough calendar full of ideas that are interesting, helpful, and fun. THAT is what I’m most excited about now that I have more time to dedicate here.

The Ability to Travel

Since deciding to quit my job, I’ve been invited to go to San Francisco, Finland and Estonia, Napa, and Wisconsin. Sure, it’s possible to do it all, but it’s nice to take these trips without needing to worry about PTO or screwing over another employee or working late at night to make up for being off the grid during the day.

I’m good at working from home.

Because I worked so closely with a remote employee, I worked from home a lot. I never had any issues making deadlines and I don’t find being home distracting. As long as I have clear goals for each day, I can get it done. Some people need an office environment or need to get outside of their home in order to be productive, but I already figured out that that was a non-issue for me. Now, let’s get to work!

I finally believed in myself.

Oh boy, here’s the cheesy part! But it’s true. I’ve had dreams “fail” before, so taking another leap in a real way is scary. That being said, I’ve realized that I never actually failed. If I failed, I would be in the exact same spot I was at 25. Instead, I’ve come so far. Even if this doesn’t pan out forever, I’m learning and growing everyday. And that’s 10000% worth it.

At the end of the day, this is just my experience and certainly not meant to be a guidebook in any way. If you’d like a post more about general steps to becoming a full time blogger or what it’s actually like to be a full time blogger, let me know in the comments and I’ll add that to my list of post ideas! 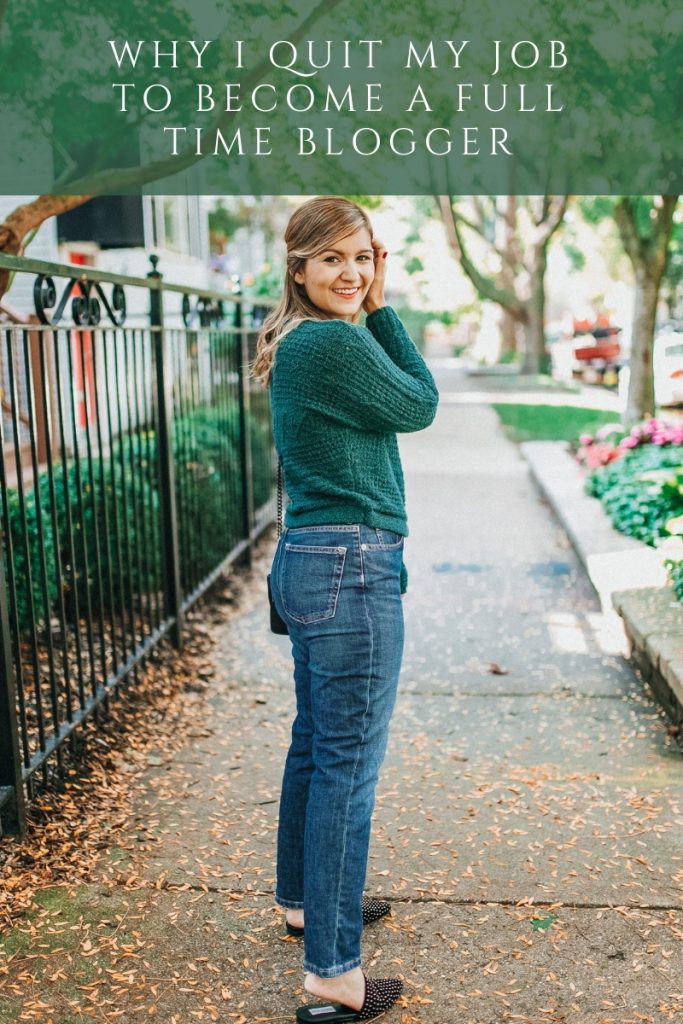 Walking Pad Treadmill – Worth it or Not?